Barangay Dulian, 42 kilometers east of Zamboanga City, features a concealed treasure that can turn into one of this city’s top draws for eco-tourism.

Mayor Celso Lobregat said that a journey into Barangay Dulian’s rugged and steep tract of land will lead you to some secret waterfalls that plunge down a narrow drop-off into a pool produced by nature where you can go for a brisk swim.

Lobregat chanced upon the waterfalls when he together with some council members and barangay officials last week hiked the rugged and muddy slopes of Barangay Dulian. 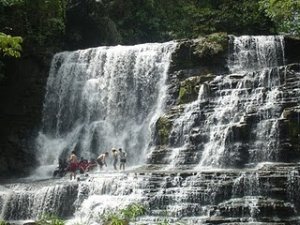 Their aim was to usher in one after the other seven infrastructure projects worth P6.2 million and also to visit areas where other government projects can be carried out to speed up delivery of public service.

What they discovered in Barangay Dulian was a hidden jewel deep in the woods: beautiful waterfalls.

Barangay Dulian is bounded on the north by Barangay Bungiao, Barangays Bolong and Lubigan one the east, Barangay Quiniput on the south and the province of Zamboanga del Norte on the west.

With a population of over 3,000 people based on the 2007 census, Barangay Dulian has a hilly landscape of productive rainforests and rugged and steep terrain.

Lobregat said that a walk on a set footpath for about 20 minutes downwards from the newly-introduced Dulian Elementary School will bring you to the hidden waterfalls--beautiful and unspoiled, which can very possibly become one of this city’s main sites for eco-tourism.

Lobregat said that hiking through the path requires you to securely hold the safety ropes placed along the pathway as the steps are jagged and slippery.

Despite his fatigue Lobregat said he could not miss the chance to kick-off his shoes and wade into the chilly and crystal clear water that falls into a natural pool, joining in with some residents who were already enjoying the wonderful scenery when he and his team arrived.

“The dip in the cool pool was a welcome reprieve after the series of inaugurations and the long trek,” he declared.

Moved by the possibilities of the hidden prize, Lobregat said the Zamboanga City Dulian waterfalls can be a perfect location for eco-tourists or adventure tourists who desire to commune and get personal with the natural world. (PNA/LAP/Teofilo P. Garcia/utb)