What is a Filipino? - Filipino Traits and Filipino Nationalism

Every country has its own identity that is radically distinctive and known throughout the world. While there are countries that lost their identity due to the settlements of colonizers, there are some which were able to maintain their image through the years.

The Republic of the Philippines is one of those which managed to assimilate foreign cultures, yet maintain its identity despite a long history of colonization.

One distinctive trait that makes the Philippines a favorite place to visit is the hospitability of the Filipinos. The friendliness of the Pinoys is one of the Filipino traits that is simply beyond compare. This positive disposition has been passed from generation to generation so that it has become normal behavior for most, if not all, Filipinos.

While it has become part of the culture of most Asian countries, the Philippines takes it to a different level. The hospitability of the Filipinos is almost exhibited effortlessly since it's something that they embrace even during their childhood years as part of the training growing up with the guidance of their parents.

Ask some foreigners why they love to keep coming back to the Philippines and expect to hear that the hospitality of the Filipinos is part of the reasons other than the natural beauty of the islands of the Philippines. 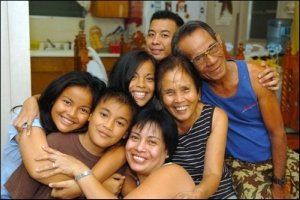 In western culture, it's not considered polite to visit your friends' or relatives' house without informing them beforehand and even if you do, it remains obscure on how they will treat you once you are there. In the Philippines, you are most welcome to pay even an unannounced visit.

Expect the entire family to offer you something to eat and drink and to welcome you so that you feel at home right away. They may in fact ask you to stay and spend the night with them. Regardless of the social status of the family that you are visiting, they will offer you the newest pillows, mats and blankets. They will not even brag about it as the act is ordinary for them.

This has become one of the traditional Filipino traits that is being practiced by the Filipino people. You can expect that this kind of attribute is going to go on and on even in the next generation. Children are already taught at such a young age to be hospitable and to be very cordial towards guests, that they grow up possessing such a wonderful trait.

Another distinguishing Filipino trait preserved by the culture is their close family ties. Filipinos value family more than anything else. In fact, when you are in the Philippines, it's normal for an extended family to live under the same roof. Grandparents live with their children and grandchildren instead of spending their remaining years in an institution for the elderly. Filipinos respect their elders, especially their aging parents or grandparents that they would rather take care of them personally than pay someone else to look after them. This is one reason why Filipinos remain the top choice for caregiver needs in many western countries.

A traditional Filipino family considers the father as the head of the family. He provides the needs of the entire family while his wife supports him while performing household chores and taking care of the children. He gives his hard-earned money to his wife while the latter does the budgeting and saving. The children are sent to school by all means necessary. Education is also a very important component for most Filipinos. (Jade Sanchez)