Donsol, Sorsogon, Philippines witnesses the peak of the Whale Shark Interaction Season during the months of March until June.

During this period, whale sharks, known locally as "Butanding" flock to the coastal waters here to mate and feed on plankton teeming at the mouth of the Donsol River.

The entire season starts in January and normally lasts until the end of the third quarter of the year although these massive sea creatures can be occasionally sighted the whole year round in the area and the waters off the coastlines of municipalities straddling the Sorsogon Bay and Ticao Pass.

The season opens for eager visitors or tourists to go whale shark watching or for the more intrepid and adventurous who want to cavort with these biggest fishes in the world up close, swim with the awesome but “gentle giants” of the sea. 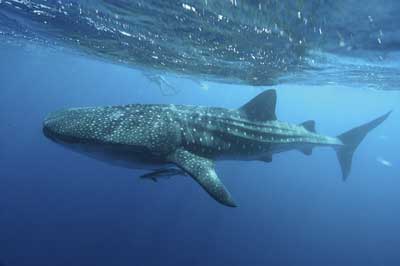 Whale Shark in the Philippines

The municipality regularly prepares for the annual celebration in April of the Butanding Festival, punctuated by wholesome merrymaking that ushers in the world’s biggest fish.

The three-day festival highlights street presentations of cultural dances, parades and fluvial processions in thanksgiving for the good life brought about by the presence of butandings in the coastal waters of the municipality.

The celebration’s main attractions, however, are eco-trips to the sea organized by trained tour operators and sand guide for visitors.

The whale sharks of this rustic coastal town by the open seas of Ticao Pass at the western coast of the province have been contributing significantly to the tourism industry of the region.

The whale shark, Rhincodon typus, is a slow moving filter feeding shark that is the largest living fish species. It can grow up to 12.2 m. (40 ft.) in length and can weigh up to 13.6 metric tons (15 tons).

The shark which can live to be about 70 years old, is found in tropical oceans of the world and lives in the open sea. The species is believed to have originated about 60 million years ago. Although whale sharks have very large mouths, they feed solely on plankton, which are microscopic marine plants and animals.

The name "whale shark" comes from the fish's physiology; that is, a shark as large as a whale that shares a similar filter feeder eating mode.

This species, despite its enormous size, does not pose any significant danger to humans.

It is a frequently cited example when educating the public about the popular misconceptions of all sharks as "man-eaters". They are actually quite gentle and can be playful with divers.

There are unconfirmed reports of sharks lying still, upside down on the surface to allow divers to scrape parasites and other organisms from their torso. Divers and snorkelers can swim with this giant fish without any risk apart from unintentionally being struck by the shark's large tail fin.