The province of Bohol is ramping up efforts to re-market itself as a major tourism destination in a year-round tourism campaign and travel fair, dubbed "Visit Bohol 2015" slated next year.

Visit Bohol 2015 was originally scheduled next week, (Dec. 8 to 10), although was tentatively postponed until Jan 9 to 11, 2015 due to the coming typhoon “Ruby”, which may affect this Central Visayas province where most of the fair participants will be coming from.

The event, which will be held in Glorietta in Makati City, will coincide with the launch of two international music festivals, international triathlon event, dive festival, new eco-tourism products and the much-awaited geo-science tours.

It will also mark the grand homecoming of Boholanos all over the world called "Tigum Bol-anon Tibuok Kalibutan," a triennial event which also coincides with the Sandugo Festival held every July.

The world-renowned Loboc Children’s Choir (LCC) will be among the acts serenading mall-goers from 6 p.m. to 7 p.m. daily. Also performing will be The Voice Philippines talent Darryl Shy and soprano Dren Ramos.

In addition to the free musical numbers and travel deals, the event will also showcase popular Boholano products. 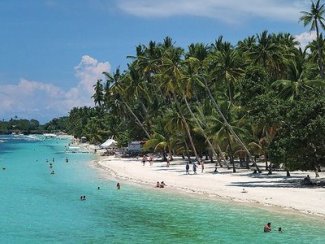 Attendees who drop by can avail of as much as 60 percent discount in accommodation, tours and other travel essentials in Bohol in the three-day event. Low-cost carrier AirAsia will also offer its lowest possible rates for tourists visiting Bohol. It flies three times daily to Bohol.

The Bohol Travel Fair signals the first event gathering all stakeholders from the tourism sector in Bohol for a massive campaign to entice tourists to visit.

It is part of the Bohol Tourism Action Plan developed through the collaboration of the United States Agency for International Development through its Advancing Philippine Competitiveness Project (USAID-COMPETE), the Department of Tourism (DOT), the United Nations-World Tourism Organization (UN-WTO), and the Pacific Asia Travel Association (PATA), as well as local tourism stakeholders.

Bohol Governor Edgar Chatto, in a statement, said that Visit Bohol 2015 is his province’s way of supporting “Visit the Philippines Year 2015” (VPY) rolled out by the DOT.

“We are very grateful to Secretary (Ramon) Jimenez (Jr.) of the DOT and its marketing arm, the Tourism Promotions Board, for their full support in the tourism recovery program of Bohol,” Chatto said.

“This year has been an exciting year for Bohol and we are seeing a much revitalized tourism industry,” he added.

Chatto meanwhile said that the launch of the campaign is also the province’s way thanking everybody for the support they have given to Bohol, especially after last year’s earthquake.

“Now that we have risen above our challenges, we are inviting everyone to come to Bohol and enjoy the beauty and serenity of our province,” the governor noted.

Bohol, which is considered as the eco-cultural tourism capital of the Philippines, is best known for its Chocolate Hills, beaches in Panglao, the smallest primate in the world, the Tarsier, and the Loboc River Cruise.

The travel fair will also introduce other interesting spots in Bohol such as the beaches of Anda, the Lamanok Mystical Island which is home to captivating caves where ancient Boholanos bury their loved ones in jars, as well as Asia’s largest mangrove forest, Banacon. (PNA)RMA/Azer N. Parrocha