The Spanish government in collaboration with the Philippines revealed efforts to integrate the human resources in Intramuros to make activities within the so-called walled city more sustainable and attractive to tourists.

"In Spain, a country of tourism, we have almost 50 sites that are declared world heritage by the UNESCO, we know that in urban centers like Intramuros, urban historical sites made out of streets, people live in and work inside," Guillermo Escribano, first secretary of Spain Embassy in Manila said.

"You're not taking all of these people out of historical sites as if it were a museum," he explained. "You have to integrate them to take advantage of their presence in order to make this attractive. What we're talking about here, preserving human heritage."

In an interview, he said Rolling Manila, a project to redesign food carts and stalls in Intramuros, is a "special methodology" that aims to promote a "sustainable" integration of livelihood and tourism.

Escribano said the vendors are part of the microcosm of Intramuros. "It is of course much better if the tourists see that the place where food is being cooked are in very good shape and condition and under hygienic conditions."

Cora Linsangan, the first beneficiary and owner of the prototype Rolling Manila food stall said the initiave indeed came in as a "big help". 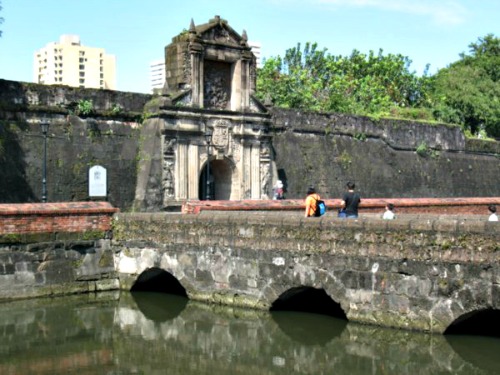 Escribano said the next step now is for Philippine institutions and the government to take decisions whether the "methodology" and its outcome can be replicated or not.

Maria Rita Matute, executive director of the Design Center of the Philippines, said the concept is to cash in on the food culture in Manila.

Together with Intramuros Administration and ZOOHAUS, a platform for networking that combines interests of different agents linked to architecture and urban planning, the three agencies aimed to "uplift" the Filipino street food vendors collective as well as reflect a gastronomic culture that is distinctively Filipino.

"This is still a prototype but the target of the Intramuros Administration is (to roll out) by first quarter of next year," Matute said.

Data by the Embassy of Spain in the Philippines show that the vendors, whether or not officially registered as such, "represent a unique collective composed mainly of women (69%) with years of experience (50 to 60 years of age) that manages a homey modus vivendi, more often stationary than itinerant."

"Despite being a living treasure of the other side of Manila, the real one or the one that is not mentioned in tourist guides, like in other capitals in the world – belittled," it said. (PNA/ Joyce Ann L. Rocamora)