Powered by Grass, Not by Gas' - Modern Tartanilla in Dumaguete

What vehicle is powered by grass and not by gas? Answer: tartanilla, the horse-drawn carriage that may soon trot in big numbers once again on the streets of Dumaguete.

Silliman University (SU) has partnered with Smart Communications, Inc. to develop the prototype of a modern tartanilla which they presented to the public.

This is not the same tartanilla that our Filipino ancestors once rode in, though. The university’s staff from its Buildings and Grounds Department, the brains behind the machinery, took the existing carriage and revamped and re-designed it. 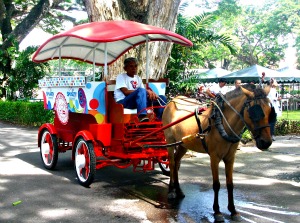 Among other innovations, they fitted it with four wheels (the original carriage only had two wheels) and disk brakes.

The result is a more roomy carriage that can carry up to 6 adult passengers. It is also less taxing on the horse, and more appealing to the eyes.

SU President Dr. Ben Malayang III said the "Powered by Grass" tartanilla was launched to show an idea that he hopes will be adopted by the private or public sectors for many purposes.

"We launched this to show that it can be done, and to see if others can adopt this. This is not just for Silliman but for Dumaguete as well," he said.

"In addressing climate change, we are putting value in indigenous practices such as the tartanilla," Dr. Malayang added.

The prototype was developed with a P150,000 funding from Smart Communications, Inc.

The prototype unit is still in its tweaking stage, as Dr. Malayang pointed out that the horse needs to be wearing a "diaper" that will catch its manure.

A set of guidelines will also be drawn up addressing the welfare and rights of the horses.

"We don't want the horse to be whipped and overworked. The horse will be used maybe for only four hours a day. We will also make sure that they receive proper veterinary care," said Dr. Malayang.

The university president added they are exploring the possibility of utilizing the modernized tartanilla as a livelihood opportunity for the university's retirees.

"We really hope there will be more tartanillas like this that will be used later on as a more environment-friendly mode of transportation," he said.

The horse-drawn carriages were once touted as the King of the Road in the Philippines. Filipinos once used them as the major mode of transportation.

The invention of gas-powered automobiles, however, have rendered the tartanillas almost obsolete.

In Dumaguete, the horse-drawn carriage as a mode of transportation have dwindled over the years to now only two tartanillas ferrying locals and tourists in the city.

Mark Raygan Garcia, head of the SU Office of Information and Publications, said their green tartanilla project was launched also with the aim of reviving the popularity of horse-drawn carriages as a selling point for local tourism.

"We also want to capitalize on the tartanilla as a tourism feature in Dumaguete. Right now, there is a waning interest in them and we want to change that, make them popular again because it is more environment-friendly," he explained.

Garcia said the university is open to for sponsors from the business sector or from the university's alumni who might want to take further the prototype and possibly enhance it to make it commercially viable.

After the launching, the modern tartanilla trotted around the university campus for a test drive with SU Board of Director Chairman Dr. Leonor Briones and Dr. Malayang's wife, Gladys, among its first passengers. Garcia said the prototype, for now, will be used for free university tours within Silliman grounds. (Rachelle M. Nessia/PIA Negros Oriental)