The national symbols of the Philippines are primarily made up of those things that embody Philippine culture, traditions, customs and ideals and communicate the idea of independence and national unification.

Symbols are very, very important to people in quite a lot of countries, especially if these symbols are related to a sense of nationalism.

The officially recognized national symbols of the Philippines are:

• The flag of the Philippines,(Pambansang Watawat ng Pilipinas) : Red, white, and blue with a yellow sun representing the provinces of the country.

• Sampaguita (Jasminum Sambac) is the national flower of the Philippines: symbolizing purity and simplicity, the flower is small, white, and pleasantly fragrant.

• Narra (Pterocarpus), the national tree of the Philippines : also known as Rosewood, it is strong, sturdy, and durable - a common rainforest tree 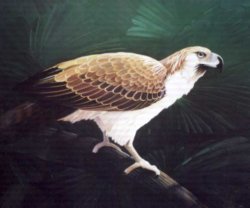 Also, there are several unofficial symbols of the Philippines that are recognized by the entire culture:

• Cariñosa or Tinikling is the national dance. Gracefulness is symbolized by this dance.

• Carabao (water buffalo) is the national animal. It symbolizes industriousness and hard work due to its use on many farms in the country.

• Bangus (milk fish), is considered to be the Philippines’ national fish. It symbolizes versatility, because of the many ways in which it can be cooked.

• Mango is the national fruit. Philippine mangoes are considered the sweetest in the world.

If there is something the Philippines is blessed with, it is the abundance of tropical fruits in the rustic countryside. There are literally hundreds of species of fruit, most of them suitable for eating and a very important part of Filipino food and culture.

• “Bayan Ko” and “Pilipinas Kong Mahal” are the national songs.

• Anahaw (Livistona rotundifolia), the national plant. This plant is often used as hat, umbrella, or fan symbolizing the Filipino's resourcefulness.