From Donsol to Matnog, Sorsogon Province is an Eco-Cultural Tourism Destination

From tip to tip, the unassertive province of Sorsogon is indisputably a striking eco-cultural tourism destination that many can bet others do not know about.

At the western border of the province is the municipality of Donsol that undeniably is the most known ecotourism destination of Bicol for the world’s largest school of whale sharks that seasonally swarms its coastal water each year.

But apart from this sensation that regularly draws tens of thousands of tourist, Sorsogon -- as many leisure travelers coming to the region, particularly this city -- Bicol’s center of tourism, might not know -- has a lot more to offer for those who are seeking for closer encounters with nature, adventure, culinary and history.

For those who are amazed by the past, the historical heritage of the province, which sits at the southeastern end of the Luzon mainland, can be traced from antiquated churches its old localities own, vintage lighthouses towering over its major shores and other landmarks that remind everyone of the province’s stimulating past.

Not a too long ride from this city, the provincial capital, is the Paguriran Lagoon that has lately emerged as a destination that tourists would certainly regret when missed out, having lost a chance to discover its exceptional beauty -- featuring a lagoon bordered around by jagged rocks in bizarre formation guarding the amazing serenity of its emerald water that is so relaxing to swim.

The next destination along the way could be the offbeat town of Prieto Diaz, which is blessed with off-the-beaten-path ecotourism sites like unexplored caves and a 500-hectare mangrove forest that is listed as a tourism park and bird-watching site.

From Prieto Diaz, a less than an hour drive, can take one to the town of Gubat that is famous for its Rizal Beach, which, unknown to many, also boasts of a fantastic surfing spot.

The next towns of Barcelona and Bulusan also boast of similar beaches, apart from the historical structures that its people preserve.

Barcelona is a humble destination that presents a simple and laid-back aura in-between Gubat in the north and Bulusan in the south.

It has a carefully landscaped beachfront park where the Presidencia Building and the century-old school for the Spaniards remain standing to bare the interesting history of the place.

Across the street opposite the park is the Saint Joseph Parish church built by the Franciscan friars in 1874 out of coral stones, beaten egg and a local wine, which is very evident in the façade, belfry and on its thick wall. 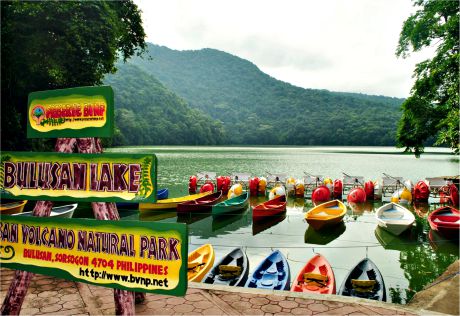 The church is known as one of the oldest and well-preserved churches in the Bicol Region whose unfading beauty is astounding.

A few kilometers away is the town of Bulusan that plays host to Bulusan Lake at the bosom of Bulusan Volcano Natural Park, a 3,672-hectare protected area serving as home to various species of endangered animals and considered the most visited ecotourism site in the province next to Donsol.

The park also boasts of several springs and waterfalls that originate from the mountains, one of them the bathing-favorite Masacrot, a man-made earthen pool with cool mineral waters coming from underground springs.

Bulusan Lake itself, which is situated at the very foot of Mt. Bulusan, one of the most active volcanoes in the Pacific Rim of Fire, is a spectacular ecotourism destination for its scenic and exquisite beauty.

Rising 340 meters above sea level, the lake that occupies an area of more than 16 hectares is dubbed as the “Swtizerland of the Orient” for its pristine perfection and the coolness of its mountain breeze.

Another tourist attraction at the Bulusan downtown is the Punta Diamante, the muralla (stone fort) that encloses the church complex of St. James the Greater Parish which remains grand in its antiquity, together with the belfry, the largest of the four watchtowers dotting the historical complex.

Before reaching the downtown, the Tan-awan, a cliff road that overlooks the town center and the expansive Pacific Ocean is a heartwarming experience as, from its vantage point, the view of Samar Island across the San Bernardino Strait is indeed stirring.

The next town of Irosin, the province’s only landlocked locality, features a 140-year-old Catholic church that sits on a hill top, affording churchgoers and visitors a panoramic view of the entire town and the surrounding countryside of lush rice fields and forest.

The church can be reached from the foot of the hill via a steep 74-step concrete stairway and from its vantage point, the peak of Mt. Bulusan appears almost near enough to be kissed.

Farther 17 kilometers south of Irosin is the town of Matnog that plays host to the huge ferry terminal serving as Bicol’s main link to the Visayas regions and site of Subic Beach, which is also called La Playa Rosa because of its long pinkish sand shoreline kissed by turquoise waters that makes it a perfectly unique destination.

Near Subic Beach is Tikling Island, which is known for its spectacular rock formations hidden behind its lush forest and colorful corals and sea plants that add a tinge of color to the breathtaking view of the island’s towering cliffs.

Back north after Irosin sits the pleasant town of Juban, known for its ancestral houses, serving as the locality’s most important landmark that tells the history of the place during the early years of the Spanish settlement in the country.

Around 20 kilometers southwest of Juban is the town of Magallanes that is secluded by thickly vegetated high mountains whose lower slopes are crisscrossed by a winding and rolling paved highway linking it to the rest of the province.

Deep inside this coastal locality facing the Ticao Pass are white sand beaches, abundant marine life, picturesque islets and some historical structures like the aged lighthouse that stands high on top of Bagatao Island, serving as the one of the town’s famous tourist attractions.

There are so many more out of the ordinary tourist destinations in the province but, according to local observers, all those places have been made underrated by the lack, if not absence, of tourism promotion on the part of local government units, including the provincial government. (PNA)RMA/FGS/Danny O. Calleja/CBD/EDS