Spiral's culinary chef artisans present the hottest recipes this Valentine's Day through 21 magical spices that would enhance the flavors of the specialty dishes at the restaurant's 21 dining ateliers.

Romance, spice and everything nice; embark in a gastronomic voyage and titillate your senses as Spiral’s culinary artisans presents the hottest recipes for romance.

Spiral’s Master Chefs says it with spices this Valentines Day proving that the recipe for love is truly stirred up in the kitchen.

Since ancient history, spices have been known to possess magical properties used to improve one’s health and enhance one’s passions.

“The spicier the food, the better it is for a person’s health and for affairs of the heart,” shares Chef Alain Rion, Master Artisan for the French Stove and Restaurant Operations Chef of Sofitel Philippine Plaza Manila. Cleopatra was said to have used saffron as an aphrodisiac. 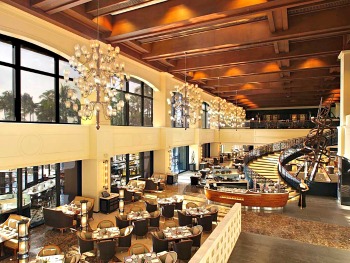 Cumin represented love and fidelity in the Middle Ages of Europe. Koreans believe that ginseng is a very potent health booster. Ginger has been known for its high amounts of potassium, copper and magnesium which enhance one’s mood and increases the heart rate.

Italians have been known to use basil in most dishes as it improves circulation, stimulates one’s libido and boosts fertility.

Chili peppers have been regarded as a staple in Central America and Asia, most especially in India as it is known as both an antioxidant and possesses anti-inflammatory properties that have demonstrated promise aiding in cancer treatment and contributes to weight loss.

#SpiceUpSpiral: 21 Recipes for Romance
Spiral’s culinary artisans show you how the masterful use of spices will be just the right pinch to turn the heat up in your love life.

The French atelier will serve as haven to the flavorful saffron bouillabaisse, braised veal cheek with carrot and ginger sauce as well as Moroccan specialties enhanced by ras el hanout couscous and chicken tagine.

The Thai atelier known for its spicy offerings will offer sizzling hot dishes of grilled scallops in coriander sauce, red curry beef with cardamom and cinnamon plus steamed whole lapu-lapu in 5 spices namely: fennel seeds, cloves, cinnamon, peppercorn and star anise wrapped in banana leaves locking in the flavors with the fish.

Feast in a decadent selection of cakes and pralines with a twist as Spiral’s Chocolaterie and Creamery presents pink peppercorn lava cake, strawberry ginger cheesecake, mango Jamaican pepper mousse and the sinful chocolate pralines: the French Kiss with black pepper; and Ruby with Star Anise.

Sofitel Philippine Plaza Manila also presents the following special offerings from its dining outlets and welness facilities: Poetry from the Heart by Le Bar, Sweet Cake of Love by Galette, Gift of Love from Spiral 2 Go, Love By The Bay: A Romantic Poolside Dinner Buffet at Sunset Bar, One and Only: Sky High Proposal at Sofitel Philippine Plaza Manila’s Helipad, L’amour pour toujours, proposal at Love by Design and Valentines Treats by Le Spa and Nail Artisan.