Portuguese navigator Ferdinand Magellan gave the image of the Sto. Nino as a baptismal gift to Hara Amihan, wife of reigning Rajah Humabon, when Magellan came to Cebu on April 7, 1521.

The same image was found unharmed among the burning embers of the city when conquistador Miguel Lopez de Legazpi came to Cebu more than 40 years later on April 28, 1565 to start the formal Christianization and colonization of the Philippine islands.

The festivities turned fever pitch Sunday morning as the carousel-type Sinulog parade rolled off to the deafening beat of drums and blare of trumpets at nine a.m. over a 5.2-kilometer parade route. 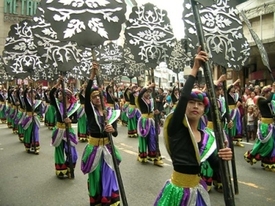 Police said the swelling crowd of revelers by mid-morning along the parade route reached as high as 2.5 million.

Thousands more watched the parade on television as this was covered live by major television networks.

On Saturday, an estimated 1.5 million people joined the solemn procession in honor of the Sto. Nino.

The crowd was so huge that the lead pack already returned to the Basilica Menore del Sto. Nino before those in the tail end could even start walking.

Sinulog 2009 organizers said this was the grandest parade ever since the Sinulog was enlarged into a full-blown annual festival in 1981.

The Sinulog, a dance of pagan origin performed by the natives to pay homage to their native idols, has been considered as the country’s Christian link to its pagan past.

Historians said the Sto. Nino’s image was found in a wooden box lying side by side with wooden idols when Legaspi came to Cebu 44 years after Magellan was killed by Mactan chieftain Lapu-Lapu in the historic Battle of Mactan on April 27,1521. Legaspi bombarded Cebu to subdue the natives.

This led historians to conclude that the natives worshipped the Sto. Nino together with their idols as they danced the Sinulog even after Magellan’s death in the Battle of Mactan.

The Buyugan Festival of Abuyog, Leyte with its environmental theme, won first place in Sinulog 2009, stealing the award from the current champion the Lumad Basakon of Basak San Nicolas, Cebu which settled for second place in this year's Sinulog Festival.

The Buyugan Festival dancers wowed the thousands of spectators at the Cebu Sports Complex and the thousands of people who lined the Cebu City main thoroughfares, with the mastery and fluidity of their steps and execution, the clear storyline and the spectacular props which provided drama to the total wonderful presentation.

The Buyugan Festival was also adjudged as third placer in the street dancing category which was won by the Sinundalay Cultural Group from Tangub City.

Another contingent from Leyte, the Karatong Festival of Dulag, won the fifth place, showing the entire country and the whole world that Leyte is a province to watch when it comes to festivals and cultural presentations. The Karatong Festival muse also won as the first runner up in the Miss Sinulog 2009.

The 200-man Tribu Kabatuk of Tacloban City headed by Mayor Alfred Romualdez and City Councilor Cristina Romualdez, also participated in the Sinulog 2009 and performed well. Its muse won as the best in production number in the Search for Miss Sinulog 2009.

The other winners in the free interpretation category were one of the most applauded Sinulog Tribe from Carmen, Cebu, third place; and the festival of Lanao del Norte, fourth place, which was headed by no less than the provincial governor.

Winners in the Street Dancing will receive the same prizes as those of the two major categories.