The highlight of the contemporary resort is the entirely refurbished Ocean Wing, that contains exceptionally luxurious and spacious accommodations with memorable views of the Visayan Sea.

Adults can indulge in the luxury of CHI The Spa at Shangri-La, one of the largest and most luxurious spa villages in the Philippines. 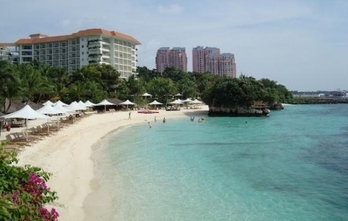 CHI The Spa at Shangri-La is designed as a secluded spa village, where you can enjoy the privacy and luxury of the largest spa treatment villas in Asia. The CHI villas are complete with spacious relaxation areas, a private garden patio, sunken tub, herbal steam room and shower.

Families will enjoy the many opportunities to share a vacation together including Adventure Zone, an indoor air-conditioned playground specially designed for children aged 4 years and up.

Consisting of over 20 separate modules spread over three levels, each designed to let children swing on ropes, climb up and down nets and ladders or crawl through shapes and heights of safely padded vinyl. E-Zone is a complete entertainment hub with arcades and two state-of-the-art karaoke rooms.

The poll was conducted among the magazine’s readership of frequent travellers based mainly in the Asia-Pacific region. Results were compiled by Taylor Nelson Sofres Hong Kong and will be published in Business Traveller Asia-Pacific.