CNN’s list of best dive sites in the world ranked eighth the Tubbataha reef, located southeast of Palawan, and in 45th place “The Canyons” in Puerto Galera, Oriental Mindoro.

According to the said website, you can feel a “super-size dive experience at Tubbataha, where everything comes in giant form.” It also said the main advantage to diving at Tubbataha is that the water is “exceptionally clean, so the marine life lives much longer, making it grow to silly proportions.”

The reef is made up of two coral atolls divided by an eight-kilometer wide channel. Its diving area has a depth of five to 60 meters.

It is also part of Tubbataha National Marine Park, which was established on August 11, 1988 and was declared a “World Heritage Site” by the United Nations Educational, Scientific, and Cultural Organization (UNESCO) in December 1993. 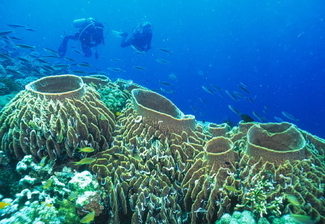 It is under the protective management of the Department of National Defense (DND), and under the technical supervision by the Palawan Council for Sustainable Development (PCSD) and Department of Environment & Natural Resources (DENR).

Another dive site in the Philippines that made it to CNN’s list is “The Canyons" in Puerto Galera, Oriental Mindoro.

“Schools of spotted and ribbon sweetlips, shiny trevallies and weird-looking batfish make up the scene at this first-rate dive site.

There’s also an explosion of coral and plant life including beautiful delicate gorgonian sea fans and hollow barrel sponges; look inside for critters lurking within,” the website said about The Canyons, which was rated as a five-star diving site and located at the northeast of Escarceo Point, some five minutes away by boat from Brgy. Sabang.

With a depth of up to 30 meters or about 95 feet to a maximum of 200 feet, The Canyons’ area was designated as a “Man and Biosphere Reserve” of United Nations’ Educational, Scientific and Cultural Organization (UNESCO) in 1973. (J. R. Mahusay/Louie T. Cueto-PIA 4B / Scuba Diving Travel )