The Department of Public Works and Highways (DPWH) and the South Korean government held a groundbreaking of the nearly PHP1-billion Samar Pacific Coastal Road and Simora-Palapag Road project.

The PHP997.50-million road project, funded through a loan from the South Korean government, will open an 11.6-km. two-lane road and build three bridges. The Korean contractor aims to complete the project by March 2020.

Han, in his message, recalled the sacrifices of Filipino soldiers during the Korean War in defending the people of South Korea from the invading forces of communist soldiers from North Korea and China.

“The government of Korea will remain to fulfill its commitment and will continue to pay our debts. This groundbreaking is a symbol of our strong partnership and friendship,” Han said. “This project is also to show our commitment to end poverty and promote regional economic growth in the Philippines.”

Han added that once the project is completed, it will significantly reduce transportation costs, improve the movement of people, enhance services, and alleviate poverty in Northern Samar.

Villar promised that under the term of President Rodrigo R. Duterte, the DPWH will complete all infrastructure projects being implemented and funded by the national government.

The department will shoulder the cost of road right-of-way acquisitions.

“This project is an example of what will happen to the Build, Build, Build project of the national government. I am confident that this road construction will succeed because we are united,” Villar said.

Mapanas Mayor Francis John Tejano said that finally, the Simora-Palapag road is no longer just a dream, but is about to become a reality. 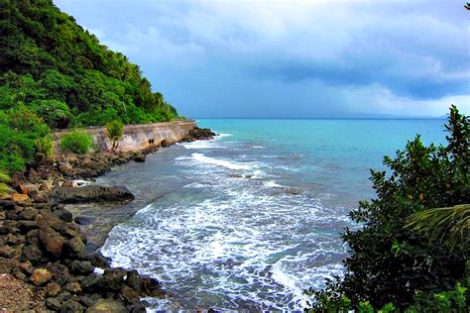 “We are thankful to President Duterte, to our district representative, and the governor who pushed for this road project that will connect our town to Catarman,” Tejano said.

Palapag Mayor Marlo Agno, whose area would be the first to benefit from the project, was also thankful to the President for being instrumental in the fulfillment of the road project.

To reach the capital town of Catarman, residents of Palapag and three other Pacific towns -- Mapanas, Gamay, and Lapinig -- need to cross the river twice through a pump boat ride.

“That mode of transportation is very costly, that is why prices of goods here are high,” Agno shared.

“Once the project is completed, this will help ease the lives of people here. The road will connect us to our provincial center and will also result in us having better access to the services the government is providing,” the mayor added.

The construction of the Simora-Palapag road would be a big improvement to the entire province of Northern Samar, which will soon become connected after decades of waiting, said Governor Ong.

“This will not only bring economic development but will also help improve our security and peace and order situation and address the insurgency problem,” Ong told reporters.

The road project will also help promote the tourism potentials of the four Pacific Coastal towns that are blessed with beaches, rock formations, waterfalls and caves, he said.

Last year, the DPWH pushed for the extension of the validity of a Korean-funded loan for the Samar Pacific Coastal Road due to pre-construction delays.

The extension of the implementation from September 2017-July 2019 to January 2018-December 2019 was also approved.

The project has been delayed due to security issues, bidding failures, concerns on hiring of consulting services, and late submission of deliverable bidding documents.

The DPWH completed the detailed engineering design last Oct. 8, 2015. Pre-procurement conference for a selection of contractors was held Jan. 11, 2017, followed by pre-bid conference on Feb. 7 and submission of technical and financial proposal on February 28. (PNA/Roel Amazona/Jazmin Bonifacio)