Robinsons Galleria Cebu, which will have a gross floor area of 155,000 square meters, is midway its completion.

The six-storey commercial building stands on a 4.7 hectare lot on General Maxilom Avenue in the North Reclamation Area in Cebu City.

The development will “reinvent, revitalize and increase property values in an area of Cebu City that was previously underutilized,” the company said. 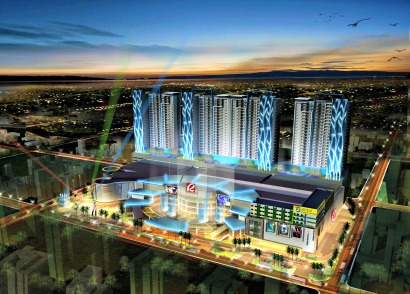 RLC’s Commercial Centers Division general manager Arlene Magtibay said the mall is the key component of the mixed-use development that will include the second Summit Hotel in Cebu, two residential condominium buildings, as well as office buildings for business process outsourcing firms.

It is projected to thrive as a hub of business activity and cultural exchange.

It will also have six cinemas, including two 3D theaters, with a total seating capacity of 1,774.

Of these, cinemas 1 and 6 have been designated as VIP cinemas and each will be equipped with a wide screen, wide chairs and Atmos surround sound systems.

The mall will also have over 300 tenants offering a mix of international brands and popular local brands.