The thematic window display is a collaboration between the TPB and DOT upon the recommendation of the Consulate General in New York and the Philippine Center to utilize the display window along Fifth Avenue which is visible to about 160,000 daily passersby, mostly U.S. and foreign tourists.

This month, Philippines’ music and arts will be featured followed by Philippine culinary art in April.

The event was live streamed to the audience that consisted of bloggers, PhilAm press, journalists, travel associations and partners who were in Kalayaan Hall to support the event in social and mass media in real time.

In his remarks, Ambassador Cuisia thanked the effort of the DOT and TPB in realizing this project that increased the accessibility to the Philippines of more people, thus promoting increased inbound travel that so far breached the 5 million-mark in 2015, up from 4 million in 2014 and 3.8 million in 2013. 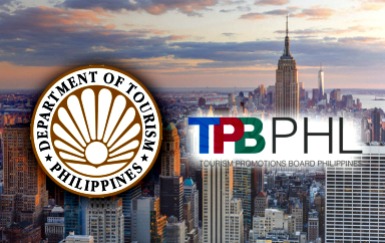 Strong arrivals from the U.S. market continued accounting for the second largest tourist arrivals behind South Korea and, of the total arrivals, the U.S. share increased from 500,000 in 2014 to 530,000 arrivals in the January to October 2015 period.

Consul General De Leon welcomed and thanked guests at the Philippine Center for coming to the launch of the window display.

He said that thousands of New Yorkers and tourists alike traverse Fifth Avenue on a daily basis and what better place to showcase the beauty of our 7,107 islands than here in New York, with the giant screens showing our beaches, festivals, food, architecture, and natural wonders.

TPB COO Enerio, in his remarks, attributed the idea of the "Window to the World" primarily to the Consul General when the latter met Secretary Jimenez at the “Memphis in May” event in 2012. Together with the Consulate General and Philippine Center, TPB and DOT worked on finally realizing this after three years.

Ms. Dy-Vera said that the objective of this initiative is to raise awareness about the Philippines by featuring the country’s natural wonders, arts, people and travel destinations that cannot be found elsewhere.

The window display is an opportunity for people to experience the Philippines by watching new videos which will be featured monthly.

The launch of the window display was auspicious as it coincided with the holding of the Philippine Business Investment Forum in New York which was attended by over 200 US and Filipino business executives and companies.

The Forum identified tourism as a main driver of the economy, spinning growth to various sub-regions that promote inclusivity resulting in economic benefits for more Filipinos. (PNA)LGI/PR-DFA/EDS