Philippines Tourism is Considered a Favorite Destination in Asia

The Philippines Tourism Policy Act, is a law declaring a national policy for tourism as an engine of investment and employment, growth and national development. 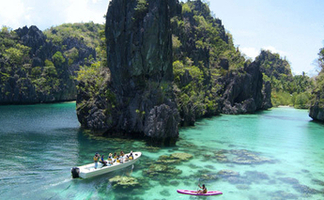 The Philippines tourism statute aims to promote the country as the premier tourist destination in Asia and to upgrade its level of international competitiveness through a system of accreditation, standards-setting and classification.

The Act establishes " Philippines tourism enterprise zones" in strategic areas, such as Cebu, Davao, Bohol, Laguna, Cavite, Boracay, Palawan and Iloilo, in the country to lure foreign investors and tourists to visit places rich with history and culture.

There are a lot of things positively going for Philippine tourism. For one, Filipinos are natural tourism assets themselves -- warm and hospitable and are largely at home with English, the world’s language of business.

The Philippines is never short of natural attractions, which are among the best in the world. Centuries of foreign rule has enriched its history and culture, which are now reflected in a wealth of historical sites and cultural festivals.

The beaches and the dive sites of Cebu, Bohol, Siargao, Palawan and Boracay are frequented by Koreans and Japanese.

Laoag and Vigan are favorite destinations of the Taiwanese because of its proximity to Taipei and the availability of direct flights between Kaoshiung and Taipei and Laoag International Airport, aside from the various natural, cultural and historical attractions.

Mainland Chinese, on the other hand, prefer entertainment centers like casinos and world-class business and investment facilities and opportunities being offered by Manila, Tagaytay, Clark and Subic.

Cebu City, known as the “Queen City of the South” and center of business and trade in Central Philippines, is also the springboard of tourism in the Visayas. One of Cebu's major attractions is the cross planted by Portuguese explorer Ferdinand Magellan on April 14, 1521.

The 1,268 haystack mounds popularly known as the Chocolate Hills are the main attractions of Bohol. Also of special interest is the Tarsier, the smallest primate found only in the province.

Siargao, situated in northeastern Mindanao, is Asia’s “surfers’ paradise.” Located there is the so-called “Cloud Nine” which is the best known surfing break. Siargao enjoys the world reputation of being one of the “Top Surfing Waves.”

Metro Manila is the gateway to the “magical islands” of the Philippines. It combines the rhythmic cadence of the horse-drawn calesas with the pulsating beat of dazzling nightlife, high-tension discos, bards, restaurants and 24-hour diners.

Palawan is known as the Philippines’ last frontier. It has perfect spots for swimming, scuba diving and other water sports. El Nido beach is still the loveliest place to commune with unspoiled nature’s beauty. Scuba diving tourists from around the world flock to Tubbataha Reef National Park, the country’s only marine natural Park and a World Heritage Site listed by the United Nations Educational, Scientific and Cultural Organization (UNESCO) in 1993.

Boracay remains the favorite and number one Philippines tourism destination in the country. Its seemingly endless stretch of fine white sand beaches, clear blue waters and serenity are alluring characteristics of the island that attract many visitors from all over the world.

When in Laoag, don’t forget to visit the old churches and the preserved heritage houses in the Ilocos and relive the ambiance of the 18th century. While in Ilocos, visitors may also feel the heat of the sand dunes of Calayab, the “Sahara Desert of the North” and marvel over the beauty of Lake Paoay, visit and see the torture chambers in Sarrat and Bacarra as well as the Cape Bojeador Lighthouse in Pagudpud.

Davao is the biggest city in the world in terms of size. Its beauty and wealth is partly vested in its vast greenery and mountain ranges and virgin forests, fertile valleys and coastal planes.