﻿Dreaming of a Florentine Style Philippine Wedding? Marry at the Assumption Church

In case you wonder why the interior of the Church of our Lady of the Assumption in Dauis figures prominently among the top choices of the most romantic venues of the exchange of “I dos” in Bohol, the reason could be traced to the human subconscious.

There is something differently romantic in the interior of the Dauis Church, said a wedding coordinator who has also asked why most of his clients pick the Assumption Church as a wedding venue.﻿

Dauis Church is the next best religiously romantic venue and the most economically sound option, considering its lovely interiors, admits the wedding planner who asked not to be named.

It was however a no-nonsense art connoisseur and museum curator who were able to establish the uncanny resemblance of the church interior with that of an ancient basilica in Florence Italy that should make every Dauisnon feel so proud.

Dauis church’s characteristic renaissance architecture somehow is a copy of a circa 1419 basilica located several thousands of miles away in Florence Italy.

It’s an eerie resemblance, Manalo pointed out, picking the trompe-l‘oeil artistic style that shows an attempt to paint realistic imagery to portray an optical illusion of carved square blocks in its frescoes. 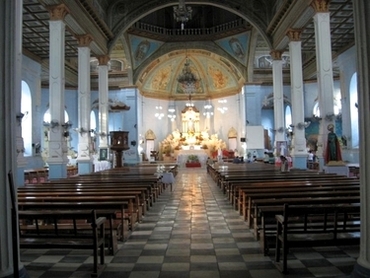 Church of our Lady of the Assumption in Bohol

In wedding photographs, what stands out over the images of the couple is a scene picked out from a 14th century romantic Florentine Cathedral, that’s what makes the wedding attain a classy value that transports the entourage from Bohol to Italy, Manalo said.

San Lorenzo de Medici, a church largely financed by the affluent Medici family of Italy who were parishioners of Florence’s main seat of the bishop then, like Dauis, took a good mix and match of artisans and years to complete the structure that later displayed a lot of diversions from the original plan.

In a historical tablet shared by Dauis Municipal Tourism Office, it said that the 18th century Dauis Church, dedicated to “La Senora dela Asuncion” underwent so many changes starting from its inception when the Spanish missionaries arrived in town in 1697.

Originally built of light materials, the church has had a long list of builders who each left their own style according to the bias of the local artisan.

Evidenced by a classic Pinoy notion of the beautiful, which is a mix and match of architectural styles, Dauis Church would surely pass as a great masterpiece of Pinoy artisan and ingenuity.

Now the 5th church after so many attempts, Dauis Church manifests an unmistakable Gothic style in its towers complete with pointed spires, lancet windows, arches and crockets.

The church façade shows a neo-classical style, which is again reflected in the massive posts separating the central nave and the side aisles.

Go around the church and the Romanesque style floats in the integral part of the church design. (mbcn/Rey Anthony H. Chiu/PIA-Bohol)