Officials of San Nicholas, a heritage town, are continuously pursuing programs to make its local pottery industry more attractive to tourists and investors as well

The Philippine pottery products, locally known in Ilocano term as “damili,” is the registered One – Town – One – Product (OTOP) of San Nicolas town considering its unique heritage culture and art.

The industry started as a source of livelihood for the residents hundreds years ago with the influence of the Spanish colonizers.

“We are now in the process of planning the strategies to upgrade our pottery industry products specifically its quality and its design to further increase its demand not only for cooking but also for ornamental purpose,” said Mayor Melanie Grace Valdez.

During the term of former San Nicolas mayor now vice mayor Alfredo P. Valdez Jr., the local potters or the “agdamdamili” (an Ilocano term) sought to expand their venture in the production of other pottery products with the assistance of the local government unit (LGU).

Now, potters from San Nicolas are not only producing the popular “red terracotta” pot (Ilocano known as “banga”), cooking pot and water pot but also pipes (lusob), tiles and bricks with various sizes and artistic designs.

“The great development of our pottery industry started when my husband, then Mayor Alfredo Valdez Jr. was the chief executive of our town as he made several initiatives to encourage our constituents to venture and revive our pottery making industry,” she said. 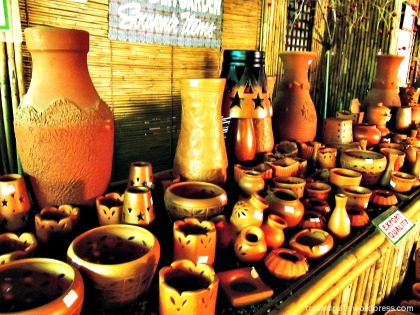 “Mayor Alfredo had sent many local potters to train in other places in the country to upgrade their skills and established a large oven for uniform cooking of pottery products,” she added.

Although she does not have the exact figure, she said the local residents engaging in pottery making now had been tripled.

“At present, we are now encouraging the big business industries not only in the province but also in Metro Manila to use our local tiles and bricks pottery products for their building constructions and landscaping,” she said.

To further promote the tourism aspect of their pottery making industry; the local officials derived it as the title of the town’s annual feast, which now been called as the “Damili Festival” held every month of December.

“Our damili festival is a showcase of our rich cultures, heritage and our attractive pottery products,” she said.

One of the attractive highlights of the festival is the street dancing pageantry and showdown. The contigents from the 24 barangays of the town composed of students, clad with elegant and colorful clothings, dance gracefully as they are demonstrating the process of damili, an Ilocano term referring to the art of making pottery products, while an Ilocano song entitled: “Agdamdamili,” is being played.

It can be recalled that Dominican Friar Valentin M. Marin, set 1584 as the founding year of San Nicolas.

Pursuant to Executive Order No. 101 dated October 22, 1908 issued by the then Governor-General James F. Smith and in reference to Act No. 946 and Executive No. 35, San Nicolas was separated from Laoag on January 1, 1909 and its territory was reconstituted. (PNA) CTB/LVM/Freddie G. Lazaro/rma