The history of the Philippine peso started during Spanish colonial period.

Coined money was brought by the Spaniards when they came in 1521. Since then, a number of modifications were documented. An attempt to standardize the currency in the Philippines was made by the Spanish government with the minting of a silver peso expressly for use in the colony and firmly reestablishing the silver standard as the Philippine monetary system. 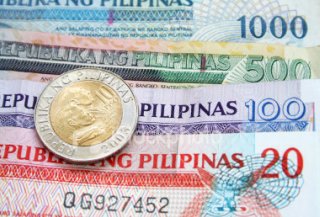 Philippine Peso
The coin, which was to be later known as the Spanish-Filipino peso, was minted in Madrid in 1897 and bore the bust of King Alfonso XIII.

Asserting its independence after the Philippine Declaration of Independence on June 12, 1898, the Philippines, under General Emilio Aguinaldo, issued its own coins and paper currency backed by the country’s natural resources. The coins were the first to use the name centavo for the subdivision of the peso. After Aguinaldo's capture by American forces in Palanan, Isabela on March 23, 1901, the revolutionary Philippine peso ceased to exist.

In 1942, the Japanese occupiers introduced notes for use in the Philippines. Emergency circulating notes were also issued by banks and local governments, using crude inks and materials, which were redeemable in silver pesos after the end of the war. The Japanese-sponsored Second Philippine Republic under José P. Laurel outlawed possession of guerrilla currency and declared a monopoly on the issuance of money and anyone found to possess guerrilla notes could be arrested. Because of the fiat nature of the currency, the Philippine economy felt the effects of hyperinflation.

U.S. and Philippine forces continued printing Philippine pesos, so that, from October 1944 to September 1945, all earlier issues except for the emergency guerrilla notes were considered illegal and were no longer legal tender.

Coins of the Philippine Peso

In 1903, a new coinage was introduced. It consisted of bronze ½ and 1 centavo, cupro-nickel 5 centavos and silver 10, 20 and 50 centavos and 1 peso. The silver coins were weight related to the Philippine peso which was minted in .900 fineness and contained 374.4 grains of silver. U.S. gold coins and ½ and 1 peso coins were legal tender for any amount, with 10 and 20 centavos coins being legal tender up to 20 pesos and smaller coins up to 2 pesos. The sizes and finenesses of the silver coins were reduced in 1907, with the peso now a 20 gram coin minted in .750 silver. Production of the 1 peso coin ceased in 1912 and that of the 50 centavos in 1921.

The American Government deemed it more economical and convenient to mint silver coins in the Philippines, hence, the re-opening of the Manila Mint in 1920, which produced coins until the Commonwealth period.

In 1937, coin designs were changed to reflect the establishment of the Commonwealth. No coins were minted in the years 1942 and 1943 due to the Japanese occupation, but minting resumed in 1944, including production of 50 centavos coins. Due to the large number of coins issued between 1944 and 1947, coins were not minted again until 1958.

Denominations below 1 peso are still issued but are not in wide use. In December 2008 a Philippine Congressional resolution called for the retirement and demonetization of all coins less than one Philippine peso.

Philippine banknotes are currently issued in the following denominations: