Though scientific evidence related to Philippine history remains inconclusive it is generally accepted that the first significant human settlement in the Philippines occurred sometime during the most recent ice age, the Pleistocene Epoch.

At that time sea levels were lower, creating land bridges that connected the Southeast Asian mainland to some of the present-day islands of the Malay Archipelago. Historians theorize that Paleolithic hunters from the mainland may have followed herds of wild animals across these land bridges, later finding their way to the Philippine Islands.

Some of these early migrations to the Philippine Islands were made by the ancestors of the present-day people of the Aeta and Agta tribes. These people continue to be primarily hunters and food gatherers, much as their ancestors were thousands of years ago. They are one of the world’s few remaining populations of Pygmies, who are characterized by shorter-than-average height. They were called Negritos by the Spanish colonizers of the 16th century.

People of Malay descent are believed to have settled in the Philippines in several waves of migration after the 3rd century B.C. Their languages developed independently because they settled in widely scattered villages.

In Philippine history the economy was one of subsistence, with each village producing most of what it needed, and land was held in common. The villagers engaged in both shifting (slash-and-burn) and settled agriculture.

The first permanent Spanish settlement in the Philippines was established on Cebu in 1565 by Miguel López de Legazpi, a Spanish expedition commander. This settlement, at present-day Cebu City, became the capital of the new Spanish colony, with Legazpi as its first governor. In 1571 Spanish forces defeated the Muslim ruler Rajah Soliman, who controlled an area of Luzon that contained an ideal harbor for Spanish trade. There Legazpi named Manila as the new capital of the Spanish colony.

The Philippines was Spain’s only colony in Asia. It was ruled as a gobernación, a territory administered by a governor, and was officially subordinate to the Spanish viceroy of New Spain. Spain initially had three principal objectives in colonizing the islands: to secure a share of the spice trade in the Moluccas, to provide a base from which to convert Asians to Christianity, and to convert the people of the Philippine Islands.

Spain never realized the first two objectives and only partially succeeded in the third. Most of the lowland population was rapidly converted to Christianity, while the upland tribes were only nominally converted. Philippine history shows the Muslims of southern Mindanao and the Sulu Archipelago were never baptized and actively resisted Spanish rule for more than 300 years.

After the Spanish-American war, the United States moved quickly to establish a political administration in the Philippines. In 1901 William Howard Taft, later president of the United States, was appointed the first civilian governor-general, replacing the military governor, General Arthur MacArthur. The governor-general was vested with executive powers and served as head of the Philippine Commission, a body appointed by the U.S. president that served as an executive cabinet and held legislative powers. The commission passed many new laws to set up the fundamentals of a national government, including a judicial system, legal code, civil service, and police force.

Just before the Pearl Harbor attack, President Roosevelt recalled General Douglas MacArthur into active service, making him commander in chief of the Allied forces in the Philippines, a momentous decision in Philippine history. MacArthur was a former U.S. chief of staff who was in the Philippines serving as field marshal, at Quezon’s invitation, to help build a commonwealth army. 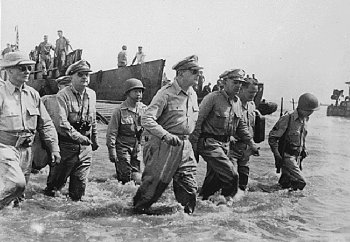 In 1942, when it became clear that the American forces were being completely overwhelmed at Bataan and Corregidor, Roosevelt ordered MacArthur to flee and directed him to lead the war against Japan from Australia. The American and Filipino troops who were left behind surrendered at Bataan in April and at Corregidor in May. The Japanese forced their prisoners of war on an infamous Death March across treacherous terrain to a prison camp near Cabunatuan. Thousands of American and Filipino soldiers died of malnutrition, illness, and torture.

The Philippine Declaration of Independence occurred on June 12, 1898 in the Philippines, where Filipino revolutionary forces under General proclaimed the sovereignty and independence of the Philippine Islands from the colonial rule of Spain after the latter was defeated at the Battle of Manila Bay during the Spanish-American War.

The declaration, however, was not recognized by the United States or Spain, as the Spanish government ceded the Philippines to the United States in the 1898 Treaty of Paris, in consideration for an indemnity for Spanish expenses and assets lost.

One of the more significant points in Philippine history, the United States recognized Philippine independence on July 4, 1946 in the Treaty of Manila. Independence Day was observed in the Philippines on the July 4 anniversary of this event until, upon the advice of historians and at the urging of nationalist politicians, President Diosdado Macapagal signed Republic Act No. 4166 into law on August 4, 1964, designating June 12, which had previously been observed as Flag Day, as the country's Independence Day.