Exotic Philippine Food of the Ibanags

Exotic Philippine food from the province of Cagayan

The Ibanag of Cagayan Province will never run out of sources of protein. In fact, they have been gathering and cooking food considered exotic among luxury restaurants around the world.

No one can challenge the palate of the Ibanags when it comes to eating grasshoppers (ganta), beetles (asimawa) and beetle larvae (abalin) which they gather in large quantities during in season.

Such exotic yet, nutritious foods have been seen as gastronomic wonders among foreigners who have initially been repulsed by eating them, but when they tried them they have enjoyed it immensely.

I remember a British writer-friend who said that Ibanags are fond of eating grass, when he tasted the adobong labong (bamboo shoots) he certainly enjoyed it just the same.

The grasshopper is usually caught along cornfields in the evening. 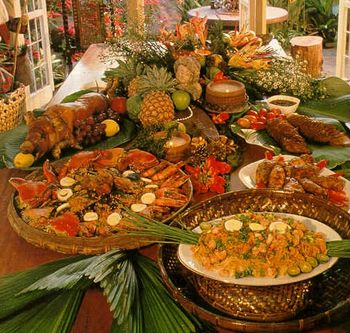 Only juveniles are taken as the Ibanag believes these are juicier and tastier than the young adults.

The wings and lower legs are removed and the main body washed before cooking.

There is only one way to cook the grasshopper – fried or to be exact, adobo with garlic, salt and a little soy sauce.

It is considered done when the grasshopper turns blackish-brown and should be served after a few minutes.

It is better to eat them when cooled.

As with the grasshopper, the edible beetle is caught in the cornfields when the corn ears are still in their milking stage.

The same preparation is done as the grasshopper.

For the uninitiated, the beetles when cooked, could be repulsive, but for those used to eating them, it is a delicious Philippine food and very rich in protein.

The larvae of the beetle or abalin is another thing. When gathered from the ground, it should be soaked in water to maintain its freshness, at the same time, allow it to release the soil from its belly.

Unlike the grasshopper and the beetle, the abalin is the choice of drinkers during its season.

It is served as finger-food while others take it as a snack food.

The taste is sweet and when cooked properly, it tastes just like peanuts!

However, hotels and restaurants in Cagayan should take a culinary lesson or two from their counterparts in Hong Kong, Singapore, Vietnam and other areas.

Restaurants here have never maximized the offering of such exotic Philippine food. Nevertheless the loss of classy restaurants in Cagayan will always be the gain of the ordinary Ibanags as far as nutritious foods are concerned. (BSY/PIA 2)