The month of February this year will not only be just a season of hearts in the country but also a season of Philippine arts.

The National Commission for Culture and the Arts’ (NCCA)—the country’s prime agency for arts and culture—is gearing up for the 2012 Philippine Arts Festival (PAF), a month-long fete that will banner the flagship projects of the seven committees of the NCCA’s Subcommission on the Arts (SCA), embracing architecture, cinema, dance, literature, music, dramatic arts and visual arts.

Under its chairman, Prof. Felipe de Leon, Jr., the NCCA has taken the theme “Tradisyon at Inobasyon” (Tradition and Innovation), which aims to further advance local creativity in the arts. PAF will feature workshops, exhibitions, forums and performances by practitioners of the arts and will take place all over the country. Eminent local and foreign artists will take part in this biggest and grandest month-long cultural gathering.

The Philippine Arts Festival will emphasize the interface of traditional and contemporary art forms and genres. A festive launching is set at the Rizal Park, to be highlighted by a kite making workshop, kite flying, and sumptuous samplings of the seven arts. Closing the PAF is the Ani ng Dangal awarding ceremony that will recognize the contribution of individuals and institutions to the promotion of Filipino cultural heritage.

Architecture
The Committee on Architecture and Allied Arts, headed by Architect Gerard Lico, will be holding several exhibitions, conferences, lectures and competitions to mark the celebration. The exhibitions will revolve around themes and topics on the morphology of Filipino buildings, Philippine styles, the works of IP Santos, and discourses on design. These events are under the “Achi[types/texts] 2012” project. Some of the exhibits include “Salumpuwit, Bangko, Silya, Atbp.: A History of Chairs in the Philippines”; “La Vida Verde: The Landscape Architecture of National Artist IP Santos”; and “Imeldific Modernity: A Dictatorship of Style.” There will also be a design competition on architectural innovation for architecture students, as well as conferences, and lectures.

Cinema
The National Committee on Cinema, headed by Dr. Miguel Rapatan, will be holding CinemaRehiyon 4 in Bacolod City, Negros Occidental. The festival features screenings and forums that focus on the artistic endeavors in filmmaking from the regions. Dubbed as the “biggest countryside/regional film festival,” Cinemarehiyon films gathers the best and emerging filmmakers from Luzon to Mindanao. It will happen from February 8 to 11, 2011.

Dance
The National Committee on Dance, headed by Shirley Halili Cruz, will be presenting Sayaw Pinoy, the longest-running Philippine Arts Month flagship project and is considered as one of the most attended, widely-successful, and much-anticipated event. Now on its ninth year, Sayaw Pinoy will continue to spread the beauty of dance in various areas all over the country. It will be participated in by top dance groups from Manila vis-à-vis the emerging groups from the regions.

Literary Arts
The National Committee on Literary Arts, headed by Dr. Priscilla Macansantos, will mount the literary arts festival Taboan in Pampanga and Baguio. Taboan 2012: Philippine International Writers Festival will gather writers and readers for panel discussions, lectures, book fair, literary readings and performances, and many more. It will happen from February 9 to 11, 2012. Taboan events in the past were held in Metro Manila, Cebu, and Davao City. 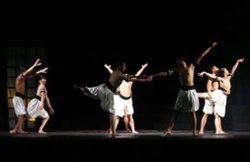 Music
The National Committee on Music, headed by Prof. Felipe de Leon, Jr., will be staging the First Asian Festival of Gongs and Bamboo Music in Cagayan de Oro City, Iloilo City and Baguio City. It will gather local and foreign gongs and bamboo ensembles for Philippine arts performances and workshops. It will be from February 20 to 24, 2012, in Cagayan de Oro, and from February 25 to 28 in Baguio and Iloilo.

Visual Arts
The Committee on Visual Arts, headed by Nemesio Miranda, will be holding the Philippine International Visual Arts Festival (PIVAF) in the town of Angono, dubbed as an “Art Capital of the Philippines”. In 2012, it will have “Rizal” as theme, calling it the Philippine International Visual Arts Festival: The Rizal Experience (PVAF: TRE). Happening from February 17 to 20, 2012, PVAF: TRE will have a lineup of activities throughout the province of Rizal—conferences, exhibitions, competitions, workshops, painting sessions, scenic tours, trade expo, parades, performances and kite-flying.

Philippine Arts Festival (PAF) is held every February in celebration of the National Arts Month and is spearheaded by the NCCA. (National Commission for Culture and the Arts)