On all thoroughfares of economically successful Tabaco City, Albay, a place called the “City of Love”, three-wheeled pedal-driven vehicles locally called “padyak” (pedicab) are all around, serving as the city’s primary means of public transportation.

It is ecological, environment-friendly, cost efficient and provides a good form of exercise to its operators. The scene had become one of the most “fun” ways of enjoying this young city resting at the foot of the majestic Mayon Volcano.

Padyaks are locally assembled lean and light vehicles that for almost a century now have been here serving as the easiest and awesome way to go green around the city. They are quick and the drivers, mostly impressively muscled men, young and old, are courteous. 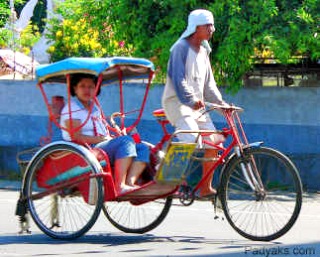 “This form of public conveyance had been a part of our tradition that even the popularity of fuel-burning motorcycle-driven cabs has failed to sidetrack,” according to city Vice Mayor Reynaldo Bragais.

In fact, the number of pedicabs in the city had been steadily increasing that from only about 1,500 10 years ago, “we now have more 3,000 of them” that are providing a good source of income to its operators given the wide public patronage it has been enjoying. Bragais said these padyaks are even patronized by tourists who are awed by its being eco-friendly and economical.

Because of that, he said the city government had been preserving its presence and putting it at the front line of tourism services the local government is offering. “We see to it that its drivers are disciplined and courteous. We orient them from time to in dealing with tourists and visitors the nice way,” he added.

The city’s pedicabs, the vice-mayor said, has earned fascination from candidates of the recent Miss Earth international beauty pageant who were ushered to a tour of Albay’s historical landmarks and eco-tourism attractions last November 16 and 17.

The candidates rode the padyaks as they toured Saint John the Baptist Church, a national historical treasure in the city as declared by the National Historical Institute and the National Commission for Culture and the Arts.

The church’s bell tower is a focal point in the city’s landscape, being visible from almost anywhere in the city that despite the rising heights of modern buildings, the church belfry remains an imposing structure.

“One can only imagine how much more impressive it was centuries ago, in a bare landscape,” the vice mayor said.

The artistry and ingenuity of the padyak’s design, its contribution to the economy and support for clean and healthy environment amazed the Miss Earth candidates that they even tried driving the cabs themselves, Bragais said.

City Mayor Krisel-Luistro said in recognition of the contribution of padyaks to the burgeoning local economy and tourism growth, the city government has been staging an activity that is included in the holding of “Tabak Festival”, a yearly tourist-oriented merry-making presenting the local historico-cultural heritage.

Tabak Festival is also a celebration for the city’s cutlery industry which had made the locality famous for its “tabak” (machete) and other cutting tools and bladed iron crafts. Called the “Padyak ng Tabaco” the activity put together the city’s over 3,000 pedicab operators to a “fiesta” of their own sponsored by the city government to give them a much-needed break from their daily grind, she said.

“This people in the padyak sector are part of our everyday lives. They are part of making of Tabaco as what it is now—a prosperous, economically matured, peaceful and live-able city,” Luistro said.

For centuries, the city has served as a strategic access point to both the Bicol region and the country through its international seaport which was one of the first international ports of entry in the Philippines.

The Tabaco International Port is a key to national and regional trade and as such, it is an indispensible harbor for the traffic of goods entering and exiting the city and the region. It is a natural harbor and is located on the eastern side of Albay facing the island province of Catanduanes and the Pacific Ocean.

Tabaco City, Luistro said is the ideal place for settlement and recreation and making a living in business and production. Cost of living in the locality, she said is relatively inexpensive given the abundance of locally produced fresh agricultural and marine products.

“Finally, transportation around the city using the ever-dependable “padyak” is economical and environment-friendly,” she added. (PNA/LAP/Danny O. Calleja/cbd/)