Paoay Lake, a Growing Rowing Destination in the Philippines

For the first time, the tranquil Paoay Lake in Paoay, Ilocos Norte, will make noise as it becomes home to amateur rowers from around the globe competing in the week-long 71st International Regatta from January 13 to 20.

The Manila Boat Club, the event’s organizer, found Paoay Lake suitable for rowing because of its calm surrounds.

Members of Team Ilocos Norte have began training at the lake days before the event’s official launch. 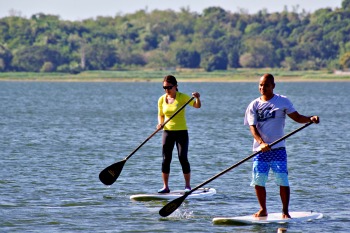 
The provincial government commissioned Philippine Olympic trainors to supervise the province’s rowers and make sure that they will be at par with other amateur rowers from abroad.

The lake has been largely unused for other purposes except as a breeding ground for various fish species. The provincial government started promoting the lake in 2010 as a site for various activities from stand-up paddle boarding to boat rides but they have yet to take off as a regular income earner for locals.

The site is a favorite spot for picnics and birdwatching during the cold spell when migratory birds from Asian countries flock to the lake to seek temporary shelter.