Powered by XPLORRA, a travel website designer in Manila, the new Pangasinan tourism website is expected to further boost tourism in Pangasinan.

Gov. Espino said that the project is a longtime dream of the provincial government, especially during the administration of his father, former governor and now 5th district representative Amado T. Espino, Jr. which, he said, "is now being realized under his term".

Recalling the gains made by the province in which the renovated Provincial Capitol has ultimately become the benchmark of other LGUs from various parts of the country in terms of tourism development, the governor said he is doing his best to continue what was already started with the challenge to add more programs and projects that will further boost the tourism potentials of Pangasinan.

In addition to this, the provincial government is doing all things that could help showcase Pangasinan as a province that is ripe for investment and for tourism.

He likewise commended all tourism officers in the province for actively doing their share to promote local tourism which is pivotal move in selling Pangasinan as one of the country’s best tourism destinations. 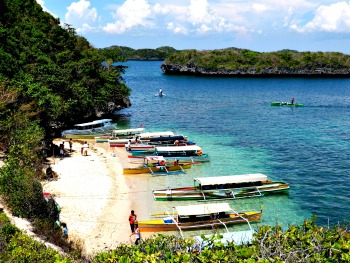 Aside from the support given by the local government executives in tourism, the governor stressed that several programs and projects are underway to showcase Pangasinan tourism to include upgrading of facilities specifically those at the Narciso Ramos Sports and Civic Center (NRSCC), launching of inter-basketball tournament which will serve as strategic activity that will help promote local tourism.

Meanwhile, the governor said the provincial government is also promoting sports tourism, citing the inter-town basketball tournament, which will tentatively open on December 17, to be participated in by local young cagers and town/city officials. To date, 35 towns have already registered to participate, he added.

“We are pushing on sports tourism to make our own provincemates appreciate the beauty of Pangasinan,” he said, noting that the best players of the different teams will then be selected to form the Pangasinan team which will represent the province in basketball tournaments throughout the country.

According to Gov. Espino, the selected best players will serve as sports and tourism ambassadors.

Meanwhile, Vice Governor Calimlim encouraged Pangasinenses to help promote local tourism through the aid of social media pointing out that Pangasinan has many beautiful sites waiting to be explored.

On the other hand, Provincial Tourism and Cultural Affairs Officer Ma. Luisa A Elduayan said that with the Pangasinan website powered by XPLORRA, Pangasinan is now assured of higher influx of visitors in the coming days.

The website, she said, will enable people to connect everything from the people to service providers and to the different destinations in Pangasinan. Furthermore, every town will have its link.

Elduayan said that the launching of the website is just a prelude or the first phase of the entire project which covered the first three districts of the province, adding that by February 2017, the website will be covering the remaining three districts in central and eastern Pangasinan. (PNA)LAP/LVM/LVMICUA/RMA/EDS