With their dusky crowns, napes, shadowy eye stripes, bluish-grey mandibles, thin brown legs, and rusty cinnamon-colored heads and necks radiating under the heat of the golden morning sun, nearly two dozen Philippine ducks (Anas luzonica) can be witnessed frolicking and winging their way over Lake Manguao in the once monarch-ruled town of Taytay in northern Palawan.

This duck which has been listed as “vulnerable” by the International Union for Conservation of Nature (IUCN) because of “rapid and continuing decline” in population due to “extensive hunting and widespread conversion of wetland habitats,” is one of the avian jewels of the 6.7-square kilometer inland sea that is said to have a 44-square kilometer conforming catchment area.

One of the caretakers, who operates a motorized dinghy that takes tourists to sightsee on the lake, told the Philippine News Agency (PNA) in a visit before the Holy Week that around 5:30 a.m., Palawan hornbills (Anthracoceros marchei) or talusi can also be witnessed in flocks of eight to about a dozen hopping and settling on tops of trees, and leave before 7:00 a.m. when the sun has completely risen.

“Too bad you were late; they were here very early. They fly early to land on the trees near the entrance to the lake; sometimes, they are noisy,” said Gerry, whose family mainly subsists on catching the cichlid fish tilapia from the lake.

In a survey conducted by the Philippine Council for Agriculture, Aquatic, and Natural Resources Research and Development (PCAARRD) sometime in 2007, it noted that there were “a total of 126 species of birds recorded in the lake, wherein 24 were migratory, 76 residents, 14 restricted to range Palawan-endemics, seven Philippine-endemics, and five had both resident and migratory populations.”

The year of the survey, the PCAARRD said, “constituted the first record of the Philippine-endemic duck in northern Palawan. “

“Matagal na ako dito, mga kulang-kulang 15 years, at mas marami sila noon. Kumunti na ngayon (I’ve stayed here for nearly 15 years, and before, there used to be a lot of wild ducks. Their number has greatly reduced),” Gerry, who does not want his full name mentioned, stated.

His testimonial seems to prove what PCAARRD reported that “threats to birds included hunting for local consumption and curiosity, rampant poaching of the critically endangered species, slash-and-burn farming, and selective illegal logging,” which could lead to homegrown extinction.

The PCAARRD survey result then said that due to Lake Manguao’s “high avian species diversity, its catchment can qualify as an important bird area for conservation.”

Unlike before when no tourists would come due to the difficulty of reaching Lake Manguao, these days it has become popular to the few foreign visitors, who take interest and love to do less traveled itineraries in the first class town of Taytay.

Gerry said the ideal time of the day to appreciate the birds’ beauty in their natural habitat is around sunrise by using paddle boats that make less noise.

Binoculars, or cameras with telephoto lenses, are the best tools to use when bird watching.

”But what birds will there be if focus on the protection, conservation, and preservation of Lake Manguao is not taken into mind by the local government unit (LGU)?” asked Rommel Cruz, one of the founders of Birdwatch Palawan (BP), a member of the Palawan Ornithological Society (POS), and who organizes bird tours under BirdingPal.org. 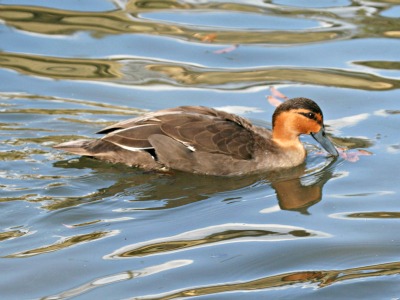 Cruz said he knows Lake Manguao is protected “in paper,” but does not remember when this happened.

He does not also know if the bird lake has a Protected Area Management Board (PAMB), “a multi-sectoral body responsible for the administration and management of a protected area created through the National Integrated Protected Areas System Act (NIPAS).

This Board decides on budget allocations, approval of funding proposals and planning on matters concerning the ecology, particularly the protected areas.

He is also not aware if the Palawan Council for Sustainable Development (PCSD) has the lake in its protection radar considering how vital it is as a habitat for various species of endemic and non-endemic birds, flora and other wildlife.

Lake Manguao, said Cruz, is a critical habitat, especially for the Philippine duck that is protected under the law because it is an endemic and listed as vulnerable.

“In Palawan, the only record of the Philippine duck, is in Quezon in southern Palawan, and Lake Manguao,” he said, adding that the duck species only stays there and does not migrate.

According to Birdlife International, the Philippine duck “is endemic to the country, being recorded from all the major islands and eight smaller islands. Records since 1980 derive from 30 localities say they’re mostly in Luzon and Mindanao.”

“Records from Siquijor and the Sulus remain unsubstantiated. A steep population decline was evident by the mid-1970s, with high numbers recorded at only a few sites in the following decade, like Candaba Marsh (Luzon) which probably supported many thousands in the early 1980s.”

Palawan, particularly Lake Manguao, is not even included in Birdlife International’s list of where they can be seen.

“The Philippine duck is a resident there; the lake provides habitat to it, and other wildlife that can only be found in Palawan. Looking at the profile of the lake… since it is low-land forest… there are large trees… trees that are cavity forming,” he said.

This means these trees provide nesting territories to birds like the Palawan hornbill, woodpeckers, parrots, cockatoos, and the likes.

Since there is no clear protection effort for Lake Manguao, Cruz stated it is prone to encroachment of squatters, illegal loggers, slash-and-burn activities, and others that can affect it as a biodiversity area.

Recently, he heard that some people want to stake claims over vital portions of the lake. If this happens, and intrusion will not be stopped, the Philippine duck might flee the area, where they can never be seen and appreciated closely anymore, and where they might be more in danger of being hunted.

For someone, who arranges birding tours like he does, Cruz knows what will be the long-term effects for Lake Manguao if “focused protection” is not imposed.

Cruz wants the lake protected, “there is no doubt,” he said. However, right now, their stand is somewhat uncommitted since when after they showed interest last year, the local government of Taytay responded without urgency.

“There was a response, but we didn’t see the urgency; Lake Manguao’s protection doesn’t seem to be in the local government’s list of priorities. They said they were busy,” he furthered, though what were said were relayed verbally.

Cruz group’s interest offered to the LGU of Taytay the conduct of an avian survey in the lake and the surrounding areas, as well as bird watching basics to expand tourism potentials that will be beneficial to its caretakers.

The survey will generate an estimate of what kinds of birds are in Manguao, their population size and the changes that affect them, as well as the collection of the causes of these changes in population or species diversity.

The bird watching basics, on the other hand, will familiarize locals on the understanding of the birds that can eventually turn them into bird guides.

Bird guiding, said Cruz, can be a source of livelihood for the residents in the area, or the 16 families that serve as caretakers of the lake.

“We proposed that while we’re conducting the avian survey, local guides are being trained simultaneously so, they can have additional livelihood,” the bird expert in Palawan said, supplying that they should be the one benefitting.

Birding tours, he said, can definitely provide income, and is one way of encouraging the protection of sites where they can be found.

“If they do not take care of the birds, then what is there to see?” he asked. “If we only talk conservation, and not see it happen, then what comes next? There should be balance; they benefit at the same time they protect.”

Lodging places for potential bird tourism are also a must, according to Cruz. This can be set up near the lake site, and made of sturdy indigenous materials that will not cause harmful effects to the environment.

This is because birding enthusiasts sometimes stay three-five days to appreciate the avian residents in their natural environment.

Although he is unable to provide any estimate as to how much the LGU could earn in environmental protection fees, local taxes, and others, Cruz believes Lake Manguao is not only an avian treasure chest, but can be a source of livelihood too, for the locals.

When it comes to Taytay, he claimed that except for the historical Fuerza de Santa Isabelle and the islands, there is nothing else to call its own since there are also the same in El Nido and Coron.

“Taytay is a very, very important gateway to El Nido; just one hour or so, you’re here. Tourists there can come here if they’re interested in the avian residents of the lake.”

If Lake Manguao is protected, Taytay can truly claim it “its own,” like Narra that has Estrella Falls to boast; El Nido that has the secret lagoons; Puerto Princesa that has the underground river, and Coron that has Kayangan Lake.

Cruz’ group still wants to pursue the further protection of the lake. But he said the initiative should come from the LGU of Taytay.

“The initiative should come from the LGU; it is theirs, we are here to help protect the lake and its wildlife,” he said. (PNA) CTB/eds/ Celeste Anna R. Formoso