Philippine Airlines has commenced the latest phase of its fleet modernization program with the delivery of its newest long-range aircraft, the Airbus A330-300 High Gross Weight jet, featuring a modern, two-class cabin configured into economy (with a sub-section premium economy) and an all-new, state-of-the-art business class.

The aircraft recently landed in Manila from the Airbus Delivery Centre in Toulouse, France.

Its arrival launches the third stage of the flag carrier’s comprehensive fleet upgrade, which began in August 2013 with the delivery of the Airbus A321, kicking off the narrow-body jet phase. The following month (September 2013), PAL received its first A330-300 HGW designed in an all-economy layout, heralding the wide-body cycle.

“The advent of the bi-class A330 HGW completes our menu of new product offerings,” said PAL president Ramon S. Ang. “This sophisticated aircraft is aimed at the discriminating business segment of the market, an important part of PAL’s customer base.”

The new arrival of the A330 bi-class raises the bar in the airline’s in-flight service. It is designed to accommodate 368 passengers in lofty comfort – 323 in economy; 27 in the more spacious premium economy; and 18 in business class, which boasts a high-technology seat that converts into a full-flat bed.

In economy, the focus is on ease and simplicity, epitomized by the SICMA 5751 articulating seat – a unique mechanism where the seat pan lifts up and slides forward as the seat back reclines. This novel design optimizes passenger space and adds appreciably to the comfort level at the back of the cabin.

Seats in economy class have an industry-standard pitch of 30 to 31 inches while those in premium economy allow a roomier 34 inches. Both cabin sections are disposed nine-abreast. PAL’s new business class showcases the Equinox 3D seat by French design firm Sogerma – a plush, ultra-modern seat with an innovative design. 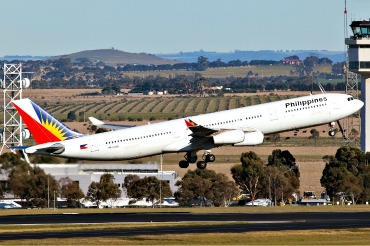 Philippine Airlines A330-300 via commons.wikimedia.org

At the push of a button, the seat stretches out into a full-flat bed over six feet long and nearly two feet wide, enabling the passenger to doze off in utmost comfort and privacy. “It’s like sleeping in your own bed at home,” said Mr. Ang.

The V-shaped, double-seat structure of the Equinox 3D lends itself to a unique configuration. When moving to the bed position, the window seat moves up to armrest level while the aisle seat moves down to just above the floor. This design allows for easy egress for the window-side passenger. Even at normal sitting position, the seat offers a pitch of 60 inches, one of the most generous in the industry.

In-flight entertainment (IFE) is provided by an amenity unique to PAL – a wireless onboard platform that allows passengers to stream content such as movies, television programs, music and apps to their own personal devices, including smart phones, laptops and tablets. This service, which is provided free, makes PAL the first Philippine carrier to offer wireless IFE.

“Once again, PAL is pioneering the way entertainment is experienced at 30,000 feet,” said Mr. Ang. “Through wireless technology, we are able to enhance and personalize our IFE offerings, and deliver these straight to the passenger’s own gadget.”

GSM and Wi-Fi capability is likewise available onboard via PAL’s “iN AiR” connectivity service, enabling passengers to make phone calls and browse the internet while in-flight.

The bi-class A330 will be deployed on services to Abu Dhabi, Bangkok, Hong Kong, Tokyo Haneda, Nagoya and Seoul throughout the year.