International adventure film producers of a reality game show consider the Philippines as a good site after the 8th edition of "Survivor France" was successfully filmed in Caramoan, Camarines Sur.

Philippine Tourism Secretary told Davao reporters that the successful filming of Survivor France led other international producers to consider the islands in the Philippines as the right site for adventure.

Durano graced the Ecotourism Congress in Davao City where tourism industry players, property owners, tourism officers and planners talked on the new standards as a guide for developing ecotourism destinations.

Durano said they had been pushing to include diving and scuba diving in another market segment.

Diving was promoted by the Department of Tourism in the European market in a Travel Show earlier this year and generated interest among tourists.

Adventure Travel is already a growing market, he said. With the global travel market of about $900 million, one-fifth of this is in adventure travel. 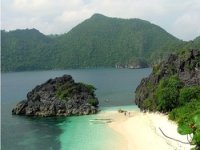 Durano meanwhile said that some of international producers from Korea and the US are looking for areas here that are ideal for location shoots.

In fact he said "Survivor U.S." is considering Caramoan as the site for their next episode.

"With our country consisting of several islands there will be lot of sites ideal for adventure," he said.

Several tourists would go for physical activity and not just sightseeing, and Davao, with authentic destinations has the ingredient for adventure travel.

Durano said they had been pushing for that to include diving and scuba diving is another market segment.

As far as the airing of Survivor France, he said part of the agreement is to include the showing of tourism sites of the Philippines as an opener to the main episode.

He said with nine million viewers daily, "Survivor France" which is beamed to television viewers in Europe and Canada will be high priced media mileage promoting tourist destinations in the Philippines.

The airing of Survivor France will be from July to September. A reality game show is one that isolates its contestants in the wilderness to compete for cash and prizes in a location of exotic environment.

Durano said at Caramoan, P200 million worth of facilities was built for the crew and contestants of Survivor France. And using it for four months, the producers paid P30 million to the provincial government of Camarines Sur. What the government paid was only the fuel needs for the entire filming, he said.