The shores of Tanauan, Leyte are fast becoming known as a haven of ocean ambassadors, the sea turtles.

Recently, another Olive Ridley sea turtle was guided towards the sea where it rightfully belongs and where other endangered sea turtles await, by Tanauan Mayor Roque Tiu, members of the Bantay Dagat, the fisherman who caught it, several members of the media and the staff of the Department of Environment and Natural Resources.

It would be recalled that two Olive Ridley sea turtles were successively found by a local fisherman of Tanauan, in the first week of October 2007. Two weeks after, another sea turtle was found and returned to the sea after the DENR staff put a tag on the creatures.

Just recently, a big green sea turtle was found by a local fisherman and then less than one month later, the Olive Ridley sea turtle measuring 18 inches in width and 20 inches long was found and guided towards its natural abode after being tagged by Mr. Tito Simbulan of the Department of Environment and Natural Resources. 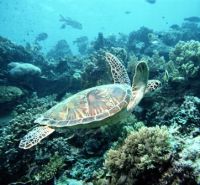 Asked to comment on the Tanauan shores becoming to be known as a haven for ocean ambassadors, Mayor Tiu said it is an honor to host the endangered species of sea turtles even as he gave the assurance that the officials and the people of the municipality will see to it that these creatures will always be safe in their own rightful abode.

Mr. Simbulan said that scientists refer to sea turtles as the only living remnants of the dinosaur age, but maybe not for long. Unless sincere efforts are undertaken, sea turtles might follow dinosaurs into extinction.

There are more than 220 species of sea turtles in the world, popularly known in the Philippines as pawikan, but only seven are considered marine (saltwater).

Five of these seven species are present in the Philippines. These are the Green (Chelonia mydas), Hawksbill (Eretmochelys imbricata), Loggerhead (Caretta caretta), Olive Ridley (Lepidochelys olivacea) and the Leatherback turtles (Dermochelys coriacea).

The most common species in the Philippines is the Green Sea Turtle, which is also found in all tropical and sub-tropical seas. Its most distinct feature is a more blunt and wider head than that of the Hawksbill Turtle. It grows up to 1.5 meters long and weighs up to 185 kilograms.

The largest species is the Leatherback Turtle, which grows more than two meters in length. The Hawksbill Turtle, as its name suggests, can be identified with its pointed beak and attractively marked shell of overlapping plates. On the other hand, the Loggerhead Turtle is known for its disproportionately bulky head. Of the five Philippine species, only the Olive Ridley Turtle is considered as carnivorous.

The olive ridley sea turtles, named for the olive color of its heart-shaped shell, are considered the smallest marine turtles measuring only 2 to 2 ½ feet and weighing 35 to 40 kilos.

Mayor Tiu said that municipal government and the fishermen of Tanauan are aware that the Philippine government has launched the Pawikan Conservation Project which is aimed at securing the protection of all the Philippine Sea Turtles. The LGU is bent on doing its best to support and make this program a success, Mayor Tiu added. (PIA 8)