Masbate's Rodeo Festival and Tourism Campaign Takes Off in April

Exciting competition on horse riding which has turned into a highly successful Rodeo Festival in the rugged terrains and wide ranches in Masbate takes off in April.

With pleasant weather, Masbate has also earned the title of "Cattle Capital of the Philippines." What's more, its robust livestock industry plays a huge role in the province’s economy.

As a sport, rodeo naturally develops where there are ranches and cowboys. Masbate’s very own rodeo developed the same way. Thus, in 1993, a group of ranchers collectively known as Rodeo Masbateño Inc. (RMI) institutionalized the Rodeo Festival (then called Rodeo Masbateño).

Twenty-one years later, the Rodeo Festival has grown and progressed as an event not just by ranchers and cowboys but by the entire people of Masbate.

Judge Manuel Sese, RMI president, could not hide his excitement for this year’s Rodeo Festival to be held next month. From a record breaking edition of the Festival in 2013, Judge Sese looks forward to more community participation this year.

“Masbateños love rodeo and this is magnified during the Rodeo Festival. After witnessing and participating in a very successful Festival last year, I hope that more people will get involved this year.

In its bid to further improve the Festival, RMI decided that for this year, and in conjunction with the celebration of the Rodeo Festival, the livestock auction will be revived and held in Masbate. 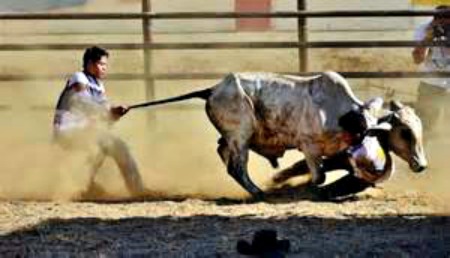 In the livestock auction, farmers from Masbate display their quality breeds from fighting cocks to cattle. People from as far as Isabela, Batangas, and Pangasinan are expected to take part in the auction.

This way, more people will be able to visit the province, see the ranches where the livestock are grown, and witness the cowboys and cowgirls in action during the Rodeo National Finals.

Another form of upgrade for this year’s festival is the bigger cash prize. From P400,000, the total cash prize is now half a million pesos. RMI hopes that this will attract more cowboys and cowgirls and result in more heart-stopping competitions.

According to Judge Sese, RMI will also continue the calesa ride which was a huge hit last year. The calesa ride goes around the town and passes though commercial areas, eateries and the Masbate Bay.

In addition, while in Masbate, one activity that tourists should not miss is horseback riding. The picturesque landscape of the province serves as a perfect backdrop for a relaxing and invigorating ride.