More than 12 years after the Buntod Reef Marine Sanctuary was opened to the public in 2001, this piece of paradise amid the sea is now the top tourist destination in the island-province of Masbate

The sanctuary has a 250-hectare white sandbar and is located in the sea waters off Barangays Nursery and Tugbo. Masbate City Mayor Rowena R. Tuason said the Buntod Reef Marine Sanctuary is one of the best destinations in the province frequently visited by local and foreign tourists.

Tuason said the sanctuary is home to pelagic fishes but fishing is strictly prohibited in this area.

The Buntod Reef is classified as No. 2 most resilient marine sanctuary on climate change adaptation in Central Philippines. It accentuates the eco-tourism aspect of the so called Albay-Sorsogon-Masbate (Almasor) alliance created by the Bicol Regional Development Council.

The sandbar has nipa huts and cottages for tourists.

Today, this reef is considered as one of the top marine sanctuaries in the country. 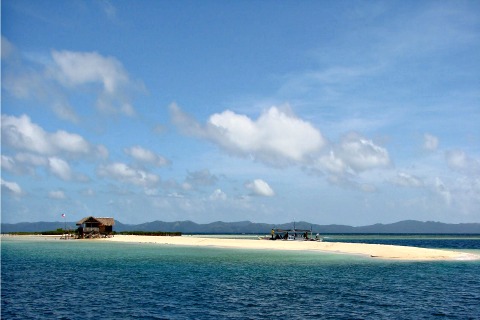 The Aquino administration, through the endorsement of the Regional Development Council in Bicol led by Governor Joey Salceda, is infusing P6.8 billion for the development of the Almasor to boost tourism and economic development of Bicol.

Salceda said during the Rodeo Festival 2014 as its guest speaker that some P3.3-billion worth of projects has been earmarked to promote tourism in Masbate alone.

“With more than 50 percent of Almasor's P6.8 billion invested in Masbate, as leader of this region, we seek to win back Masbate from its Visayan leanings.

That is not buying your goodwill, rather this P3.3 billion physically integrates the economy, especially the tourism potential of Masbate, into the mainstream by making Albay, Masbate and Sorsogon just one tour package,” Salceda said.

“It is not just oneness for oneness’ sake, but rather the physical proximity of Ticao to Bulan, of Masbate City to Pilar, of Aroroy to Pioduran is real and should be optimized.

More so, we see Masbate complementing and enriching the total cultural offerings of Almasor -- and one uniqueness of Masbate is this Rodeo Masbateño, which is by any measure the most significant of its kind in the Philippines,” he added.

The Almasor is an alliance of the provinces of Albay, Masbate and Sorsogon to showcase their unique and various destinations to attract new investors to put up investments, thus, lure local and foreign tourists to come in the countryside.

“Bicol is truly blessed with the inclusion and integration of Masbate into our ethnicity and geographical unity. Let it be said that we have come to recover Masbate from Cebu and regain it for Bicol,” Salceda said.

Department of Tourism Bicol Regional Director Maria Nini Ravanilla said the Almasor alliance has gained ground tremendously as this is the first alliance of provinces in the country that showcases tourist destinations as one package.(PNA)JBP/FGS/RBB/CBD/pjn