Artificial bamboo reefs have been bringing marine life back to life in Padre Burgos, Southern Leyte.

This was revealed through the recent documentation dive more than a year after 76 modules of artificial reef were launched off Poblacion village, said Rio E. Cahambing, provincial consultant on marine tourism.

“The bamboo artificial reefs have become rich haven of fish, corals, invertebrates, and many other marine organisms,” Cahambing said.

“The transformation testifies to the fact that artificial reefs need not be so expensive and sophisticated, and that locally-available and eco-friendly materials, such as bamboos, can become productive and useful in propagating marine life in the most natural way possible,” the official added.

The concept echoes the vision of Scaph Pro Philippines, a French-based non-government organization, recently established in Padre Burgos town, with Michael Levett as president and Jean-Francois Marailhac as vice president and technical director.

The group is now implementing its second year of Operation Green Reef, an effort to rehabilitate or re-establish marine ecosystems using artificial reefs.

Additional 24 modules were recently launched, making a total of 100 modules for the same site. Several new modules are also being launched in the adjacent Cantutang village. 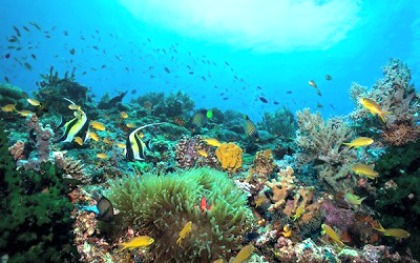 As of the last assessment made late last year, 146 fish species and 124 species of invertebrates were identified in the site.

The recent documentation dives done this late July, shows that the number of species had risen as soft and hard corals, as well as fish and invertebrates continue to colonize and congregate within the artificial reefs.

“This is an indication that the whole artificial reef site is fast becoming a productive marine ecosystem,” Cahambing added.

Scaph Pro Philippines is willing to consult with other local government units interested to undertake similar projects in their respective areas in Southern Leyte.

In February, the group learned that there were two villages hit by massive coral destruction caused by the damaging fishing method called "cerosca" similar to muro-ami.

These villages, Poblacion and Cantutang, where all corals are virtually destroyed because of cerosca done many years ago, and only a small percentage of the corals managed to recover.

Wikipedia, an online encyclopedia, described cerosca as a method that uses an encircling net together with pounding devices. These devices usually comprise large stones fitted on ropes that are pounded into the coral reefs. It is repeatedly and violently lowered into the area encircled by the net, literally smashing the corals in that area into small fragments in order to scare the fish out of their refuge.

Cahambing added that restoring reefs in Southern Leyte province not only has big impact on tourism, but also has economic impact for the locals. Southern Leyte is known as the diving capital of Eastern Visayas.

“The reefs of Padre Burgos are generally healthy. In fact there are world class dive sites in the area, teeming with fish and amazing marine life,” he said.

Padre Burgos is a small fishing town in the province of Southern Leyte, famous for its white sand beaches and also the jump-off point to the historic island town of Limasawa. (PNA) LAP/SQM/Roel T. Amazona/egr