To appeal to more tourists and entice everyone to visit Rizal Park in the heart of Manila City, park executives have increased the quality of the 'attractions' at the world-famous park.

The first of these are the Rizal Park Musical Dancing Fountain that caught the attention of the inquisitive public that had been wanting to get a taste of its splendor since its' start-up.

Similarly, the Rizal Park Children's Playground, which was has also been one of the Filipino families' preferred leisure points, as it offers neat picnic areas, vivid murals, and pleasurable attractions suitable for children and adults of any age.

Furthermore, the parade of huge floats exhibiting the showbiz personalities involved in the Metro Manila Film Festival (MMFF) has been one of the best-loved of the visitors.

Park executivess said they always anticipate thousands of Filipinos to troop to 'Luneta' to observe every holiday season.

Data from the National Parks Development Committee (NPDC) demonstrated that almost 500,000 Filipinos get together at the park to celebrate Christmas Eve and Christmas day every year. 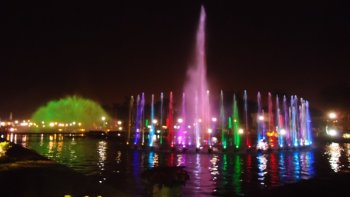 According to NPDC executive director Juliet Villegas, it has become the Filipinos' habit to travel to the park in celebration of Christmas and New Year's Day every year.

"The large number of people who visit Rizal Park on Christmas Eve is always expected and anticipated by our office. While it has been the custom of several Filipino families to spend Christmas in Rizal Park, others just prefer to amble around before going home in time for their Noche Buena," Villegas noted.

Villegas is also calling for the public to visit and participate in Rizal Park's New Year Countdown which occurs every year on Dec. 31 to celebrate.

Bands, music and an Orchestra will perform yearly throughout the event and during the year, topping it off with splendid fireworks exhibits and an exciting Dance Parties for all of the guests.

Data also indicated that Rizal Park visitors rose to 500,000 this year, or fivefold increase over the 100,000 during the preceding years.

For his part, NPDC Media Information chief Kenneth Montegrande proclaimed that the Philippine Relief Map, next to the Japanese and Chinese Gardens, will be repaired and refurbished for the public's leisure.