This year's Catandungan Festival in Catanduanes province will showcase anew the National Surfing Competition slated on October 18-20, at the renowned surfing village of Puraran in the municipality of Baras.

Catanduanes provincial tourism officer Carmel B. Garcia said the competition is expected to lure surfing enthusiast from abroad and different parts of the country, including Catandunes locales, that will put anew the 'Majestic Waves' of Puraran in the national and international limelight.

Garcia said that the event will bolster the campaign of the province, especially of Baras town, to host more surfing competitions and promote the local tourism destinations and attractions in Catnaduanes.

The "Majestic Surfing Cup” is an annual surfing competition organized by the municipal government of Baras, in partnership with the provincial government of Catanduanes and the Catandungan Festival Committee.

The Department of Tourism (DOT) in Bicol also supports the event highly recommending the same as a must for tourists in the island province hailed as a surfer’s paradise in Bicol. 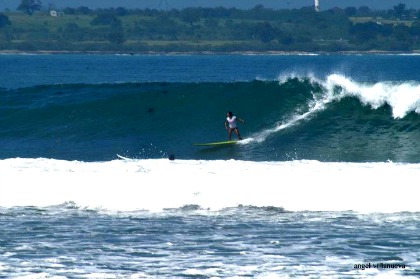 The surfing completion was first introduced ten years ago by then Governor Leandro B. Verceles, Jr.

In 1979, when two Australian surfers visited Baras, Catanduanes, they “discovered” what they called the “majestic” waves of Puraran Beach. Since then, the surfers come every year for the surfing season around August to November.

And since then, have followed many well-known surfers. Surfing competitions are held every year, in August for the town fiesta, and in October for the national and international surfers.

Catanduanes is known for its natural tourist spots such as the Luyang and Vargas caves in Virac, Nahulugan Falls in Gigmoto and Solong Falls in San Miguel, as well as pristine beaches like those in Twin Rocks, famous for its white sand shore nestled in a cove, and the Pururan Resort in Baras, which is often visited by Australian and other foreign surfers.

For questions or inquiries regarding the competition, interested parties may contact Patricia Maliksi at 09163383328, Cecile Dalma at 09216641933 or Aireen Tanael at 9276282251 or e-mail majesticpuraranresort@gmail.com . (MAL/Edna A. Bagadiong-PIA5/Catanduanes)