Home of the famous beaches and Virgin Islands, the Philippines is also known when it comes to food and cooking style.

The style of cooking and the food associated with it have evolved over several centuries from its Malayo-Polynesian origins to a mixed cuisine with many Hispanic, Chinese, American, and other Asian influences adapted to indigenous ingredients and the local palate. 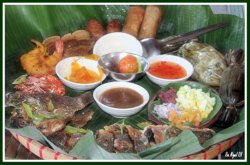 As with most Asian countries, the primary food in the Philippines is rice. It is most often steamed and served during meals. Leftover rice is often fried with garlic to make sinangag, which is usually served at breakfast together with a fried egg and cured meat or sausages. Rice is often enjoyed with the sauce or broth from the main dishes. In some regions, rice is mixed with salt, condensed milk, cocoa, or coffee. Rice flour is used in making sweets, cakes and other pastries.

The most common way of having fish is to have it salted, pan-fried or deep-fried, and then eaten as a simple meal with rice and vegetables. Food is often served with various dipping sauces. Fried food is often dipped in vinegar, soy sauce, and juice squeezed from Philippine lime.

Here is a list of the most popular Lutong Pinoy, food in the Philippines. So if you come and visit the country, make sure to grab a bite to make your stay more enjoyable.

• "Adobo/Inadobo"; cooked in soy sauce, vinegar and garlic. It could also refer to just roasting on with light oil, and garlic.

• "Halabos/Hinalabos" – mostly for shellfish. Steamed in their own juices and sometimes carbonated soda.

• "Kinilaw" or "Kilawin"; marinated in vinegar or calamansi juice along with garlic, onions, ginger, tomato, peppers.

• "Lechon/Litson/Nilechon"; roasted over a spit.

• "Prito/Pinirito"; fried or deep fried. From the Spanish frito.

• "Tapa/Tinapa" – dried and smoked. Tapa refers to meat treated in this manner, mostly marinated and then dried and fried afterwards. Tinapa meanwhile is almost exclusively associated with smoked fish.

• "Sigang/Sinigang"; boiled, usually with a tamarind base. Variant bases are: guava, raw mangoes, calamansi also known as calamondin, and almost any other sour fruit abundant in the locality.

Filipino cuisine is distinguished by its bold combination of sweet, sour, and salty flavors. Filipino palates prefer a sudden influx of flavor, although most dishes are not heavily spiced. While other Asian cuisines may be known for a more subtle delivery and presentation, Filipino cuisine or Lutong Pinoy is often delivered all at once in a single presentation, giving the participant a simultaneous visual feast, aromatic bouquet, and gustatory delight.

Cooking and eating in the Philippines has traditionally been an informal and communal affair centered around the family kitchen. Filipinos traditionally eat three main meals a day: almusal (breakfast), tanghalían (lunch), and hapunan (dinner) plus an afternoon snack called meriénda.

Usually, either breakfast or lunch is the largest meal. Food tends to be served all at once and not in courses. Unlike many of their Asian counterparts Filipinos do not eat with chopsticks. Due to Western influence, food is often eaten using utensils, e.g., forks, knives, spoons. But the primary pairing of utensils used at a Filipino dining table is that of spoon and fork not knife and fork.

The traditional way of eating is with the hands, especially dry dishes such as inihaw or prito. The diner will take a bite of the main dish, then eat rice pressed together with his fingers. This practice, known as kamayan, is rarely seen in urbanized areas. However, Filipinos tend to feel the spirit of kamayan when eating amidst nature during out of town trips, beach vacations, and town fiestas.