Palompon Mayor Ramon Oñate said that the new tourist destination will cater to visitors waiting for their turn to explore Kalanggaman Island. The local government only allows 500 tourists in the picturesque island daily.

The local government unit will also offer a 100-meter long sky biking and 150-meter long zip line as additional attraction. The expansion will be completed on the second quarter of 2017.

Lodging facilities will also rise on site, according to Oñate.

The town mayor said that just like Kalanggaman Island, they will also impose daily visit limitations in the eco-adventure park once fully operational. 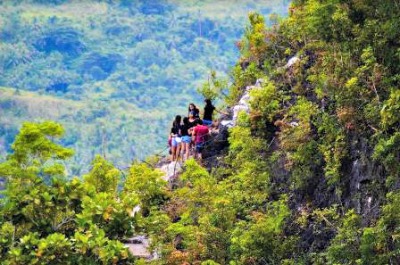 “We are not after how much income we will get, but on how much knowledge the people will get from visiting the site like preservation of natural resources,” Oñate said. “We want to be known as eco-tourism friendly destination.”

The site was under PES Chem, which used to quarry limestone to support the operation of Philippine Associated Smelting and Refining Corporation in nearby Isabel town.

In 2007, PES Chem stopped its 25-year operation. The Department of Environment and Natural Resources took control of the site.

The local government then asked the DENR through a memorandum of understanding if they could supervise the management of the area, which they recently converted into an eco-tourism destination.

Palompon is a hall of fame awardee for best tourism-oriented local government (municipality category) of the Association of Tourism Officers of the Philippines (ATOP) pearl award. The town is known for Kalanggaman Island, a premiere tourist destination in the province that has been drawing tourist for its turquoise clear water and sand bar.