Beauty Also Smiles at the Other Side of Legazpi

Talk about Legazpi and what strikes one’s mind is majestic Mt. Mayon, the world’s most perfect cone-shaped volcano that serves as its eternal representation.

But going through the southern end or the side of the city opposite the sector where the iconic volcano sits, developments that have taken place in the past 13 years make this premier Bicol metropolis, now called the “City of Fun and Adventure” that emerged as one of the country’s convention capitals, a paragon as to how a livable community and leading tourist destination should be.

The most prominent landmarks that have risen during those years and attesting to the city’s gains insofar as infrastructural developments and tourism facilities are concerned are the Legazpi Boulevard, Kapuntukan Hill, Ligñon Hill Natural Park, Embarcadero de Legazpi and The Oriental Legazpi Hotel and Resort.

Legazpi Boulevard is a coastal road network extending from the city’s central business district and port area to its southern barangays.

Since its opening about two years ago following seven years of civil engineering works and landscaping, the boulevard -- considered the longest outside Manila -- has become one of the most picturesque seaside roads in the Philippines, with a spectacular view of the Mayon Volcano and Albay Gulf.

The boulevard has also become a favorite recreation area for the city, owing to the cool, fresh sea breeze gently blowing from the gulf.

In mornings and afternoons, locals, visitors and tourists rendezvous at the boulevard for their outdoor physical fitness rituals.

The expansive area along the boulevard whose road network would extend up to the Bicol International Airport now undergoing construction in Barangay Alobo, Daraga town, is deemed as a new frontier of development that the city government is vigorously pursuing -- especially in the fields of trade, commerce, agriculture and tourism.

Its extension now ongoing constructions covering more than six kilometers of a rolling terrain over hills and mountain sides along four agricultural barangays would offer travelers a panoramic view of Albay Gulf.

At night, colorful streetlights make the boulevard a sight to behold.

Along the boulevard lies the Kapuntukan Hill, a historical landmark also called the “sleeping lion” where a monument to the great Spanish conquistador Miguel Lopez de Legazpi stands near its foot.

Ligñon Hill is a 156-meter peak that has always been one of the city’s leading landmarks which for years since its development into a tourist facility four years ago was known only as site for the Philippine Institute of Volcanology and Seismology observatory located along its upper flank and an old lighthouse on its summit.

Today, it stands as one of the city’s prime destinations for sightseers, adventurers and even fitness buffs. 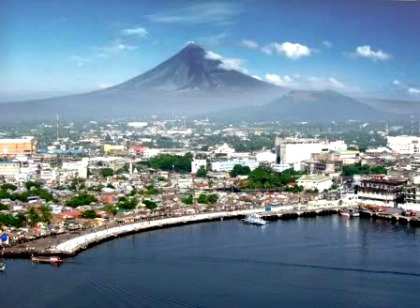 The new park, which features a carefully-designed landscape that caters to restaurants and shops on its summit, offers sightseers a panoramic 360-degree view of the entire city, its neighboring towns of Daraga and Sto. Domingo, Albay Gulf and the southern slopes of Mayon Volcano.

It is located near the Legazpi City Airport which last January was opened as a new gateway for chartered international flights of tourists coming from China, Korea, Taiwan, Germany and other countries which have signified interest in this city as a new direct destination.

Embarcadero de Legazpi is a privately-owned P1-billion world-class waterfront lifestyle hub at the city harbor, the first of its kind in Southern Luzon.

As Bicol’s premier urban mall, Embarcadero redeems the glory days of the city’s port district, which was once the region’s melting pot of economic activity -- as Spanish trading galleons used to dock in it.

Today, as a Special Economic Zone accredited by the Philippine Economic Zone Authority, it has opened doors for new investments—bringing in stores and brands that never found its way to this coastal city before.

With a beaming search light on top of its shimmering lighthouse and colorful lights reflecting on seawaters, nocturnal partygoers are drawn to this newfound haven where serene nature meets stylish urban living.

More than a venue for shopping, dining, and entertainment, Embarcadero is also home to one-of-a-kind adventure sport, the 350-meter zipline from a lighthouse over the Albay Gulf.

At the heart of this waterfront mall is the Celebration Plaza, a 105-square-meter event center that accommodates conventions, social gatherings, beauty pageants, fashion shows and other events.

Embarcadero also has a 90-foot high skywalk that gives a view of the historical Albay Gulf, the cityscape and Mt. Mayon.

It also has a 59-foot Climbing Wall and a Bungee Trampoline.

Situated on Taysan Hill overlooking the alluring and cordial cityscape, The Oriental Legazpi is one of the latest high-end hotels to open in the city which refreshes the landscape of Bicol and puts on a new slant in hospitality and accommodations.

It beckons one to a world of unparalleled bliss, serenity and contentment amid a backdrop of the majestic Mayon and the blue waters of Albay Gulf.

During May 15-20, this resort-hotel will be the venue of three international meetings organized by the United Nations World Tourism Organization (UNWTO) that expects the participation over 1,000 tourism industry dignitaries representing 21 member-countries.

According to City Mayor Noel Rosal, whose administration is behind all these developments, “ours is now a highly livable and competitive city because it offers safety, convenience, livelihood, lifestyle and sustainability that attract people to live, work and play here.”

Indeed, Legazpi has been able to transform itself from nothing special but Mt. Mayon into a sparkling metropolis loaded with heavy tourism-related activities and a world-class city that plays host to an influx of investments and massive urban development. (PNA)Danny O. Calleja/CTB/FGS/cbd/