The city government here has issued a guarantee that the 2014 holding of Ibalong Festival, which comes this month, will be loaded with more fun, adventure and surprises.

“I assure you of more fun, exciting adventures and big surprises as we go along with this month-long celebration—the 23rd Ibalong Festival,” City Mayor Noel Rosal, who is also chair of the festival executive committee, told a press conference at the city mayor’s office Wednesday.

The festival’s formal opening will be on Aug. 16 but preliminary activities like the screening of candidates for the Mutya ng Ibalong beauty pageant, which was held last Aug. 3, the kick-off of the Mt. Mayon Triathlon on Aug. 10 and opening of the 2nd Ibalong National Women’s Beach Volleyball Championship on Aug. 15-17 will serve as advance activities.

The triathlon event is one of the big surprises offered this year as it will be participated in by about 200 celebrated international players, Rosal said, describing the event as a grueling physical fitness competition that will pass through varied routes along the Legazpi Boulevard to the town of Sto. Domingo, Albay, near the foot of Mt. Mayon.

The women’s beach volleyball games expected to be played among teams coming from big universities and colleges around the country will be held also along the Legazpi Boulevard.

To highlight the formal opening program of the festival on Aug. 16 will be the rolling out of the Ibalong Festival Weekend Market that will open up business opportunities to small and medium enterprise operators in the locality and those coming from far as Metro Manila and Cebu, City councilor Lilian Ramirez, the event’s committee chairperson, said in the press conference. 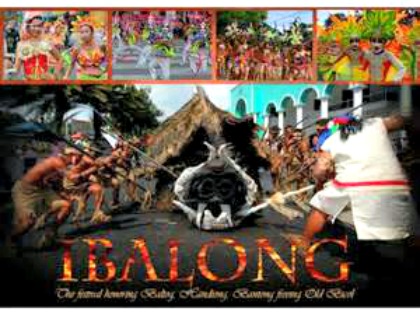 The event will also mark the launch in the city of Juan Time that will make Legazpi the first local government unit in Bicol to have the giant Juan Time clock to be mounted by the DOST at the heart of the city’s business center, Briñas said

He said the S&T fair -- which will be focused on regional development thrust, tourism and disaster risk reduction and management (DRRM), will be attended by delegations headed by DOST regional directors from 16 regions of the country.

In this affair, Legazpi will showcase its tremendous gains in tourism development that has made the city achieve remarkable growth in the travel industry and in DRRM that won for it the national championship in the Gawad Kalasag Awards of the National Disaster Risk Reduction and Management Council last year, Briñas said.

“Legazpi recognizes DRRM not only as a program but also as a culture—a trait that other LGUs should replicate,” he added.

One more big surprise that Ibalong Festival 2014 will be pulling, according to Rosal, is the Philippine Basketball Association (PBA) Legends Exhibition Game to be held at the ICR on Aug. 22.

The game will feature veteran Bicolano PBA players like William “Bogs” Adornado who hails from this city, Fortunato “Atoy” Co of Daet, Camrines Norte, and Rommel Daep of Manito, Albay.

Other events include the Ibalong Zumba Party at the ICR and Otaku Summit at the Pacific Mall on Aug. 23; 1st Ibalong Color Run at the Legazpi Boulevard on Aug 24; the Ibalong Enduro Pilipinas Mountain Bike Race along the foot of Mt. Mayon; the Operation Hoops Care Goodwill Mission to the Philippines at the ICR on Aug. 26-27; and the Siram na Sana: A Legazpeño Food Festival at the Casablanca Convention Hall.

The traditional Ibalong Street Presentation, which will feature six contingents to portray in different styles the epical heroes of Bicolandia -- Handyong, Baltog, Bantong and Oryol -- and the Ibalong epic through dances and colorful attires, will be held at the city downtown on Aug. 30.

During the street presentations, the competing contingents will parade in the streets wearing masks and costumes to imitate the appearances of the heroes and the villains, portraying the classic battles that made their way into the history of Bicol.

During the night of the same day will be the coronation of the Mutya ng Ibalong at the ICR.

Ibalong Festival, now on its 23rd year, is a month-long non-religious fiesta depicting Bicol’s early beginnings based on the Ibalong Epic written by the late Prof. Merito Espinas that tells of mythical super heroes, villains, monsters and wild animals in the ancient times.

“This is the longest running tourism promotion-related festival in the Bicol region that expresses warmth and goodwill to all people and encourages visitors and tourists to celebrate with the Legazpeños,” Rosal said. (PNA) CTB/FGS/Danny O. Calleja/cbd/