For 33 years, drums here would come alive and beat festive rhythmic sounds everywhere as locals prepare for the yearly thanksgiving with dances to celebrate the blessing of a continuous yield of the sweet, luscious lanzones fruit, said to be the sweetest around the country.

“Buahan,” as it is fondly called, is mostly grown in the backyards of local folks here.

It is a yellow grapelike fruit that grows in clusters or bunches.

Local agriculturist says it is a seasonal crop and only bears fruit in the months of September to November.

Now as the third week of October draws near, when the festival is annually set, the island has prepared a week long festivity highlighted by a lively and colorful extravaganza of traditional dances (tableau presentation) on October 27, a Saturday.

Most performances would portray the tale of the fruit and how it gets so sweet, while fairy dancers await to astound the crowd with their grace and beauty. 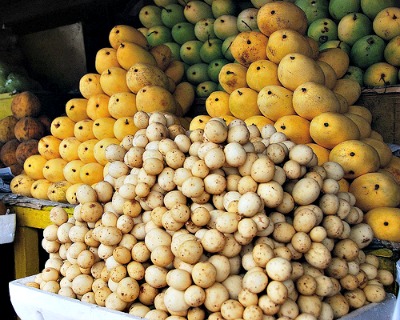 
You can expect dances of all sorts during the festivity, as it features a Music and Kabog (Bats) showdown, Kalanrakas sa Kabataan (Charivari-Street Dancing), Kalanrakas for the barangay category, and festival king and queen, and diwata (fairies) showdowns.

Visitors may also take pleasure at the island’s best products and handicrafts which will be showcased in the Agro-Industrial Technology Trade Fair (UGMAD).

This festivity is among the province’s top tourist come-ons, apart from the Lenten Walk around the island dubbed "Panaad" and summer season treat. (Jorie C. Valcorza/PIA10)