Ladies of the Philippines and Filipino Women

Ladies of the Philippines have their own reputation as desirable and unique and it is one of the reasons why Filipinas have made names for themselves in beauty contests held around the globe.

In fact, in the most publicized beauty contest in the world, the Miss Universe Contest, representatives from the Philippines consistently shine above most of the contestants.

Filipino women are not only about the physical appearance as they have been well-disciplined and instilled with Filipino values by their religious parents.

No wonder why the ladies of the Philippines are not only sought after by the Filipinos but also by the foreigners coming from different places all around the planet.

There are different ways of dating Philippine ladies. There's the traditional way of introducing yourself and inviting her for a date.

Giving her gifts will not simply win their hearts as the Filipinas value relationships.

The Philippines remains a predominantly Catholic country and it is the reason why every Filipina wants to have a lasting relationship to ensure that their children will grow up well-guided by both parents. 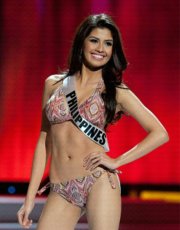 There is no divorce in the Philippines that is why it is important for a Filipina to marry the right man that has the same values as she does regardless of his nationality.

If you are not in the Philippines, you can access different websites that cater to online dating.

In this way, you get to know her before meeting. As you can read online, there are a lot of successful intermarriages in the Philippines.

It is very common to see married couples consisting of a Filipina and an American or a Japanese or Chinese.

This has been part of the culture as the Philippines itself was a colony of different countries that resulted in mixed ancestry of the Filipinos.

The Philippines is now highly influenced by the western culture, but don't get too excited as there are still ladies of the Philippines who remain highly conservative that you have to ask permission from their parents before you may be able to pay a visit at home.

The Filipino family is very hospitable so don't be intimidated if you are asked to visit her at home or to be introduced to her parents.

This is quite a common practice to assure their parents that they are dating the right person.

Since the Philippines was under Spanish colonial rule for more than 300 years, some of the Filipinas have mixed racial ancestry that makes their appearance even more stunning.

Most of the ladies are well-educated so you might want to be very careful not to send a wrong signal.

The ladies of the Philippines are also empowered as evident in the past years and they don't just hold high positions in the private sector but also in the government.

Filipinas are a combination of beauty and brains plus good values that make them more admirable.