An official of the Department of Tourism in Region 1 (DOT 1) has expressed hope for a better La Union Surfing Break, during the launch of the annual surfing event.

Dubbed “La Union Surfing Break,” it will be held from October 26 to 28 here.

“We are looking forward to a bigger La Union Surfing Break, especially an increase in tourist arrivals”, Martin S. Valera of DOT 1 said.

Valera said residents in the area, together with partners, are working hard to ensure its success as this is one of the cleanest beaches in the Philippines.

He said they clean the beach in San Juan two times a week.

“We are very proud of this surfing break since, we produced a lot of surfers. Likewise, it creates income for individuals who teach tourists how to surf as testimonies attested here, and I hope that media can entice their group to experience this big activity. It’s more fun in La Union,” Valera said.

“A lot of various personalities came here including foreign and local tourist just to see and visit the place,” Yabez said. 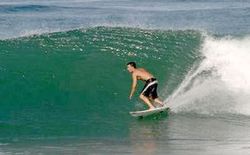 He added that people always remember La Union, especially San Juan, as the surfing capital in the North.

Yabes assured that visitors are secured because there are sufficient PNP personnel, coast guard, barangay tanod and Red Cross staff to respond in case of emergencies.

There will also be a fun run and martial arts exhibition, Yabes said.