More or less one million local and foreign tourists visited Intramuros for the observance of the Holy Week this year, the Department of Tourism (DOT) said, indicating success in the promotion of faith tourism in the country.

“For a pre-dominantly Catholic country like the Philippines, the Holy Week or Lenten season is a perfect time to reflect, repent, and travel," DOT Secretary Wanda Teo said.

"We congratulate the Intramuros Administration (IA) and our Faith Tourism sector for the successful reopening of the Walled City for the Lenten season," she said.

Visitors were welcomed with a series of events to promote the Walled City as a "holistic faith destination" in Metro Manila.

For the first time since World War II, it opened seven sites, composed of churches and chapels, to the public "to restore the vibrant religious culture" prevalent before the war. 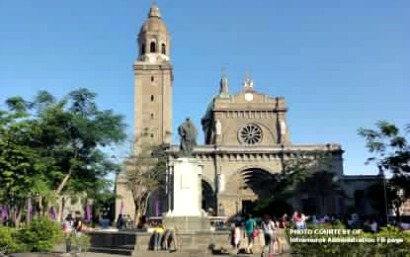 The Minor Basilica and Metropolitan Cathedral of the Immaculate Conception, also known as Manila Cathedral, in Intramuros

IA has also installed Via Crucis stations, or a series of images depicting Jesus Christ on the day of His crucifixion with accompanying prayers, along General Luna Street of the Walled City, which follows the Vatican II sanctioned New Way of the Cross.

In front of the Palacio del Gobernador, a modern interpretation of the Senakulo or the dramatic presentation depicting the Passion of Jesus Christ: his trial, suffering and death entitled “Martir sa Golgota," was also staged by the Tanghalang Sta. Ana theater ensemble directed by Lou Veloso.

As the department boosts the faith tourism sector in the Philippines, Teo said they are pushing for more faith-based activities for the Catholic faithful catering to both local and foreign tourists.

“We aim to capitalize on our unique Catholic festivals and Filipino traditions to pursue more Catholic pilgrims or faith tourists from Brazil, Mexico, United States, Columbia and Spain among others,” Teo added.

According to the 2017 Annuario Pontificio, or Pontifical Yearbook, and the Vatican Statistical Yearbook, eight out of ten Filipinos are Catholics accounting for 82,212,678 believers in 2015.

The Philippines is also ranked third in countries with most Catholics next to Brazil and Mexico. To date, it remains the largest Catholic nation in Asia.

According to the DOT, the rise of spiritual tourism in the Philippines is anchored on the diversity and richness of the churches and religious sites open to the public.

Around 72 dioceses in 16 ecclesiastical provinces, as well as seven apostolic vicariates and practically a church in every town or village, presents a wide selection for Catholic devotees.

“We will also highlight the numerous papal visits in the country with the head of the Catholic church as the focal influencer of pilgrimage and faith tourism,” Teo said.

Pope Paul VI visited the Philippines in 1970 while Pope John Paul II came in 1981 and 1995. In January 2015, the country made history for the world’s largest papal mass during the visit of Pope Francis with an estimated crowd of six million. (PNA/Joyce Ann L. Rocamora)