The Aeta tribe is one of the original indigenous inhabitants of the Philippines. In Cagayan Valley Region, there are lots of them still living in the mountains.

But nowadays, many of them are already blending in with the mainstream society, living with the culture of the common people and even adopting global trends.

In previous years, Aetas did not live with the common people, nor value education or civil ways. That is why the majority of them are unregistered - during birth, wedding and even deaths.

In this region, it was only in the1990s that they started immersing themselves in civilization. There were no records of Aeta couples who exchanged vows in public or registered with the local civil registrar. There are also no records or documents on their courtship practices, culture and tradition. All records show only their traditional way of daily living.

In Penablanca, Cagayan, a newlywed Aeta couple marked a history as the first to stage a night and day wedding in public, the first registered wedding at the local civil registrar and the first documented Aeta love story and courtship.

Recently there were some special and unforgettable days for Angel Gamata and Angelo Mondejar. These were the days when they wowed to God and the public to live together in richer or in poorer, in sickness or in wealth, and till death do they part. The days when they proved that they can live normally like others and can celebrate a wedding like the others.

The couple make up one beautiful and extraordinary love affair. Theirs is not the traditional way but it embraced global trends. Their love story could be a theme for a televison series, a telenovela or a romance film.

Angelo Mondejar, 19, lives within the established Aeta community at Penablanca, Cagayan the known Caving Adventure Capital of the Philippines, while Angel Gamata, 18, is a native of Lasam, Cagayan one of the remotest towns in the province requiring almost 4- to 5-hour travel to each site.

In the normal and traditional life of the said indigenous group, an Aeta man would marry a woman from his own tribe or within his community at early age. But with Angel and Angelo, it's very different. 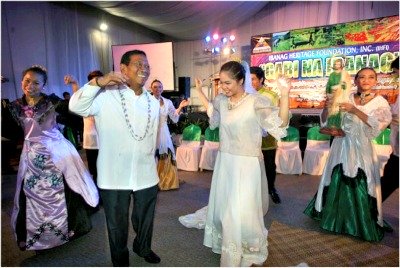 We were just textmates. My cousin who was a neighbor of my husband gave my number to him. Then he texted me and there started our romance, Angel narrated.

She also said they were just textmates for few weeks until the time when she visited her cousin at Penablanca and took a vacation in the area.

When we met, I saw that he is sincere with me when he proposed a wedding. I gladly accepted the offer because I also felt that I love him. Many say that we are meant for each other as we have the same name, Angel said in a very soft voice.

They only had a few days to prepare for the wedding. On the day of their wedding, all of the community folks helped in the preparation. They installed an Alona or wedding hall where they held the gala night.

All of their neighbors and other neighboring barangays thought that the two will only do a night wedding but they were shocked when Angel and Angelo confirmed that they invited the public to witness their matrimonial ceremony night and day.

Daig pa nila ang kasal ng katulad namin kasi ang uso ngayon e night wedding lang para makatipid pero sila night and day pa. (They celebrated more than our way because the trend now is to celebrate night wedding only to spare expenses, but they did it night and day), commented one of their Ibanag neighbors. Ibanags are the locals of Penablanca.

The two exchanged vows in public in a matrimonial ceremony officiated by a pastor of the Church of Christ, in which the groom's family is a member. After the mass, they did again a Gala dance with their godparents and supporters from which they generated 25,000 pesos, more than the gala proceeds of the other couple's wedding in the area.

The couple was so happy about the success of their nuptial. Many expressed happiness as they witnessed the first Aeta wedding ceremony but there were others who lamented that the ceremonies were patterned after an Ibanag wedding tradition, not the Aeta wedding practices.

Robert Salbino, the chieftain of the community, said their traditional wedding is very ceremonious. On the wedding day, they should dance Balabbag - their courtship dance. The bride and groom exchange vow s in the presence of their Panlakayan or oldest male member of the community. The bride and groom usually wear red-colored dress and use instruments made out of indigenous materials for their rituals.

But during the wedding day of Angel and Angelo, the bride wore a white wedding gown, the god parents danced the Maskota courtship dance of Ibanag, a church pastor officiated the ceremonies and they hired a sound system with disco lights for the gala night a very Ibanag way.

Of all of the traditional wedding celebration of Aetas, they practiced only one the Atang or offering of cooked food for God and souls of their late loved ones. But this tradition is also present in the Ibanag culture and tradition.

When asked why they did not apply their original wedding practices, the chieftain said there are only a few of their old community members who know the tradition and they don't have their indigenous instruments anymore to allow the practice of the wedding traditions and rituals.

Despite fear for the extinction of their tradition, culture and practices, Robert Salbino expressed gratitude to the couple because their wedding ceremony became an eye opener to the Agta community to value wedding registration as they are the first to register at the local civil registrar, and able to prove that Aetas can stage a wedding ceremony with pride and honor. (Oliver T. Baccay/PIA-2)