Holy Week Celebration in the Philippines

Holy Week in the Philippines is a unique and fascinating experience

In this predominantly Roman Catholic country, the Philippine's commemoration of the week leading up to Easter is a one of the most fascinating religious events in the world.

Holy Week is known as Semana Santa (the Spanish translation of the religious festival itself). Many superstitions abound regarding this holiest of weeks, such as that wounds inflicted or received on Good Friday take long to heal and that amulets acquired on the said day are especially powerful. 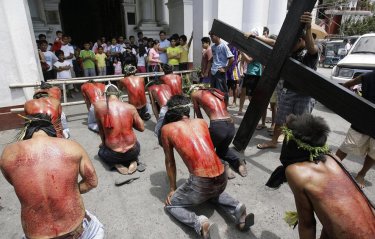 Throughout the week, most businesses in the Philippines either shut down operations until Black Saturday or have later opening and earlier closing times, and (mostly local) television or radio stations nationwide either stay off the air and those that sign-on air shows with more solemn or serious content, especially films and programs with a religious theme.

An example is the airing of the Seven Last Words on Good Friday live from churches on various local channels and films about the life and death of Jesus. During the Easter Triduum, usually a public holiday, some television stations even interrupt broadcast altogether until Black Saturday in observance of this solemn occasion, Holy Week.

Holy Monday to Holy Wednesday marks the beginning of the Pabasa (literally, "reading") or the Pasyon, the marathon chanting of the poetic prayer-story of Jesus' life, Passion, and death, which continues day and night, for as long as two straight days.

Come Maundy Thursday, a popular tradition is "Church Visit" or "Visita Iglesia", which involves visiting a church or several churches at which the devotees would pray the devotion known as the Stations of the Cross. In the morning, they would join their parish priest in the usual morning mass in the cathedral. This time of the day is a very joyful celebration as this is considered by many priests in the country to be the day when they renew their sacerdotal vows.

Also celebrated on this day is the last Mass before Easter (commonly called the Mass of the Institution of the Lord's Supper) usually including a re-enactment of the washing of the Feet of the Apostles; this Mass is followed by the procession of the Blessed Sacrament before it is taken to the Altar of Repose. TV and Radio networks in the nation will formally either sign-off until Easter Sunday or start restricting broadcasts related to religion, especially to the Holy Week.

Good Friday, a public holiday in the Philippines, is commemorated with solemn street processions, the Way of the Cross, the commemoration of Jesus' Seven last words and a Passion play called the Senakulo. In some communities (most famously in the province of Pampanga), the processions include devotees who self-flagellate and sometimes even have themselves nailed to crosses as expressions of penance or in fulfilment of a vow accomplished in thanksgiving or exchange for a granted request or prayer. After three o'clock in the afternoon of Good Friday (the time at which Jesus is traditionally believed to have died), noise is discouraged, bathing is proscribed and the faithful are urged to keep a solemn and prayerful disposition. Towards late afternoon and evening there is the procession of the dead Christ.(similar to the funeral procession of Eva Peron the first lady of Argentina)

The figure of the corpse of Jesus is taken in solemn procession and borne on a decorated hearse, after which it is venerated by the faithful. Some even accord the image with the proper funeral rites such as laying the body in state or, in some instances, by smoking the seated corpse of Jesus over a fire in accordance with local, pre-hispanic funerary customs. Such a procession may involve a various number of other saints, and tradition dictates that the last image in the line is the Sorrowful Virgin.

Black Saturday is traditionally observed with silence and solemnity. Preparations are made for the Easter Vigil to be celebrated that evening.

Easter Sunday is the culmination of the whole commemoration of Holy Week. Unlike the previous days, this is a time for joy and merriment. The mood is festive and the people are busy preparing an Easter feast. A theatrical play takes place at dawn, the risen Christ meeting his sorrowful Mother. The two images come from different sides of the street and meet at the town church’s facade. The people clap and cheer and once again, sing praises of hymn.

It is truly a unique experience for a tourist to witness the Filipino’s celebration of Holy Week. For the locals, this is where religious fervor, theatrics and camaraderie blissfully collide.