This year’s Kiangan, Ifugao fiesta promises to be more exciting with the inclusion of new and thrilling events

Eulalie Dulnuan, the Municipal Tourism Officer and Executive Assistant to the Mayor, said the fiesta dubbed as ‘Gotad Ad Kiangan’ set on April 29 until May 3, offers exciting and entertaining activities such as the opportunity to hike and have adventure in the unique Open Air Museum which was established in 2013.

The Open Air Museum is a community-based project of Barangay Nagacadan , a World Listed Heritage Site, through the help of the UNESCO and the Globally Important Agricultural Heritage System.

It includes five museums which are the Architecture involving houses built without nails or screws; Ifugao Life Cycle where one can learn more about the Ifugao life, customs and traditions; the Ifugao Food Preparation where one can have a snack of the two recipes of traditional goodies; the Ifugao Art and Crafts where one can admire and appreciate the ornate weaving which is one of the oldest art of Ifugao culture, and Agriculture in which the entire Ifugao life and culture is strongly connected with the rhythm of the rice cycle and the entire ecosystem.

The Open Air Museum presents a microcosm of the Ifugao culture to visitors at the least intrusive manner and hiking through it, one will experience walking through the paddies of the rice fields immersing into the world of the Ifugao farmers and their history while learning more about the ingenuous culture of the Ifugaos. 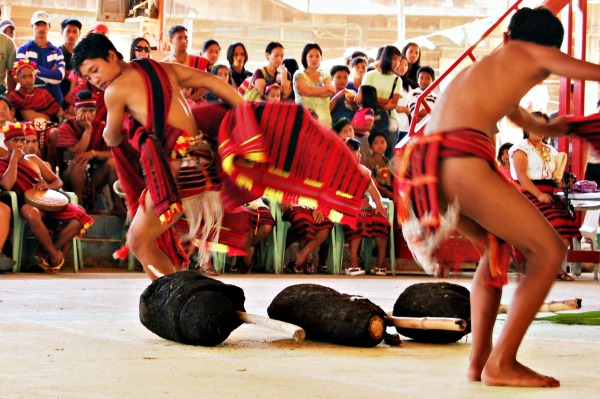 During the walk, the adventurer accompanied by a local tour guide can also encounter several native houses and granaries and enter it to know their traditional way of life with all his senses - listen to the “Hudhud Chants” sung by the Ifugao women while harvesting rice, try himself to tie the rice bundles and make them ready for storage or play the traditional gong instrument at the same time surrounded by the unique landscape of the rice terraces and its forest system called “Muyung”.

The “Gotad Ad Kiangan” is one phase in the performance of the three prestige rites of the Ifugaos that traditionally involves a lot of merrymaking like drinking, singing, chanting and dancing.

It is a special feature of the town fiesta with its ethnic parade called “Gottadan”, performing arts competition, ethnic games, rice wine drinking and folk singing.

The 2014 Gotad celebration starts on April 29 with the arrival of the different barangay or village delegates, opening of the food bazaar and flower show and the inter-faith rally.

On April 30 will be the Grand Cultural Parade, opening program, opening of the Agro-Industrial Fair, Bamboo Carving Competition, ball games competition. In the evening is the Cultural Night of merrymaking called “Holyat” and the Performing Arts Competition.

On May 1 is the “Gotad Ad Kiangan” proper, bikathon, continuation of the performing arts competition, judging of the woodcarving competition and in the evening is the pre-pageant “Search of Bugan ya Wigan di Kiyangan” which is a local and indigenous version of a beauty pageant.

On May 2 are the Marathon in G-strings, Ethnic Games Competition and Coronation of “Bugan ya Wigan di Kiyangan.

Activities on May 3 include the Neo-Ethnic Street Dancing Competition, championship games, and awarding and closing Program and a “Fiesta Rock Concert” .

This year’s theme is “Nurturing Alliances Amidst Cultural Diversity for a Globally Competitive Community”.(JDP/Dan B. Codamon/PIA CAR, Ifugao)