It was on June 12, 1898 when the first Filipino independence day from foreign repression was declared. One hundred fourteen years after that momentous day, the Filipino people still value their sovereignty to a great extent that celebrating Independence Day has already been part of their culture.

On the day that the Filipinos obtained their independence, their culture was marked significantly forever. Traditions, beliefs and the arts of the Filipinos have been revolutionized in addition to the liberty they have attained.

This year, Filipinos honor the 114th year of Philippine Independence and the 25th Anniversary of the 1987 Constitution of the Republic of the Philippines, and as part of itsannual traditional celebration, the Philippine government, led by President Benigno S. Aquino III and the National Historical Commission of the Philippines (NHCP), will be holding “Kalayaan 2012”. The entire month of June 2012 will be dedicated for the commemoration of Philippine freedom. Activities for the month will be in line with the theme for this year which is “Kalayaan: Pananagutanng Bayan para sa Tuwid na Daan”. 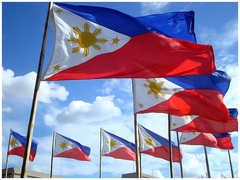 The activities for “Kalayaan 2012” will be reflective of the culture of the Filipinos and will feature Philippine liberty through the arts. The entire Independence Week will be packed with various exciting activities organized by the country’s very own government agencies and offices. It will begin with Paco Park Presents “PanatasaKalayaan”, a musical tribute tothe renowned national artist for literature, Amado V. Hernandez, will be held on June 8, 2012, Friday, 6:00 PM at the Paco Park in San Marcelino, Manila. It is a free-for-all show where special guests will be performing such as soprano Raye Lucero of the Mabuhay Singers, baritone Ronnie Sta. Maria and guitarist Eddie Suarez.

Musikalayaan Concert, a concert led by the Armed Forces of the Philippines (AFP),National Parks Development Committee (NPDC) and the Department of Public Works and Highways (DPWH) to celebrate the Flag Day and Independence Day, will be held on June 9, 2012, Saturday, 6:00PM at the Central Lagoon in Rizal Park, Manila. Lt. Gen. Jessie D. Dellosa, the Chief of Staff of the AFP, will be the guest of honor for this event. This will also be attended by NHCP Executive Director LudovicoBadoy and NPDC Executive Director Juliet H. Villegas.

Various Filipino performing artists will be showing off their musical talents for the commemoration of the independence of the Philippines.

On June 10, 2012, Sunday, 8:00 AM, a send off ceremony for the “ParadangPag-anyaya” will be led by the Association of Volunteer Fire Chiefs and Fire Fighters of the Philippines, Inc. (AVFCFFPI) in cooperation with the National Historical Commission of the Philippines (NHCP), National Parks Development Committee (NPDC), Armed Forces of the Philippines (AFP) and the Metropolitan Manila Development Authority (MMDA). Department of Interior and Local Government(DILG) Sec. Jesse M. Robredo will be the guest of honor for the occasion. Other guests are the Hon. Juliet H. Villegas, Hon. LudovicoBadoy, Mr. Jose Go, and Federation of Filipino Chinese Chamber of Commerce and Industry President Mr. Tan Ching, who will be giving an inspirational message for that day.

Following that event, there will be a free Concert at the Park “Mahalkong Bayan”, 6pm at the Rizal Park Open Air Auditorium, Manila. Everybody is invited to watch an hour of ballet set to Philippine music featuring Ballet Repertory Philippines, joined by dancers from the Ballet Dance Academy.

A Philippine Independence Day celebration would not be complete without a tribute to the country’s national hero, Dr. Jose Rizal. Enjoy the 30-minute spectacle of light and sound sculptural tableau for 3 days honoring Dr. Jose Rizal that feature poignant moments of Rizal’s final hours. This is a collective obra of four national artists, Leandro Locsin, Lamberto Avellana, Lucio San Pedro and Rolando Tinio, The “Martyrdom of Dr. Jose Rizal: Light and Sound Presentation” will be on June 11-13, 2012 at the Execution Site in Rizal Park Manila. This is free of charge so that everyone can take pleasure in the entertaining exhibition.

The culminating day on June 12, 2012 of the “Kalayaan 2012” will still include several cultural activities such as a Filipino Indigenous games Exhibition, led by the Philippine Sports Commission,that features Arnis and PencakSikat. There will also be a Special Kalayaan Concert from 1-9PM for the SadiganngKalayaan and LuzViMinda, and Party Kalayaanfrom 9pm-12mn at the Quirino Grandstand. In the evening, a spectacular and breath-taking Special Fireworks Display will be presented to highlight each segment of the concert for that night.

“Kalayaan 2012” will surely be an exciting and educational, month-long event that will bring out the cultural and Filipino pride in everyone. This will make people realize the true value and reveal the luster of freedom that the Filipino ancestors worked hard for in the years before June 12, 1898. (B.L. Peñera/PIA)