Ferdinand Marcos, president of the Philippines from 1965 to 1986, was considered by many to be the worst Philippine politician of the 20th century.

Ferdinand Edralin Marcos was born September 11, 1917 in the Ilocos Norte region of the Philippines. He eventually attended the College of Law at the University of the Philippines and graduated near the top of his class in 1939. He was noted as not only a top student but also for his athletic abilities and other extra-curricular activities.

He began his political career as a representative of the 1st district of Ilocos Norte, from 1949 to 1959. He then moved on to the Philippine Senate where he served from 1959 to 1965. 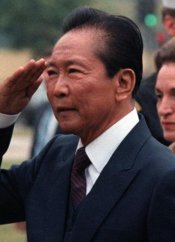 Ferdinand Marcos was elected Philippine president in 1965 and vowed to undertake several infrastructure projects with the help of the military, and institute government reform. Thus began a reliance on the military to support Marcos in most of his endeavors in the future.

Mr. Marcos won a second term for the presidency in 1969 under allegations of fraud, vote buying, and accompanied by a substantial amount of violence. As the political situation in the country worsened, Marcos eventually turned to martial law in September of 1972 and clamped down on the media, political dissent, and almost all civil liberties.

During this time, work on a new constitution was being done and Ferdinand Marcos used the new constitution to provide himself with sweeping new powers and extend his rule indefinitely. The Marcos regime confiscated numerous large business deemed to be monopolies and distributed these assets to political cronies. The political opposition was either jailed, as was the case of Benigno Aquino, Jr., forced to disappear, or simply killed.

During the years 1972 to 1980 the Philippine military increased in size by 150% and the country was also receiving substantial military assistance from the United States. Much of this assistance was allegedly diverted by the regime for personal use by Marcos, his family, and his political allies. Mr. Marcos again used the military hierarchy to effectively control numerous corporate, governmental, and civic organizations throughout the country.

The beginning of the end for Ferdinand Marcos came with the assassination of opposition Senator, Benigno Aquino, Jr. in 1983 upon his return to the Philippines after a period of self-imposed exile. As he stepped out of the plane and on to the tarmac he was shot and killed. Marcos, his wife Imelda, and their political allies were blamed.

Finally in 1986 Marcos was driven from power by the "People Power Revolution" in the Philippines. He and his wife Imelda fled into exile and made their way to Hawaii. He died in Hawaii on September 28, 1989, due to kidney, heart and lung ailments.

Today, the Philippine government continues to search for and attempts to gain access to the billions of dollars that were looted from the treasury and siphoned off from official assistance given to the country during the Marcos regime.