Famous Filipino scientists recognized by the Philippine National Academy of Science and Technology who have been commended for their extraordinary work in their field of study.

Dr. Bernido has been acknowledged for his research accomplishments in Theoretical Physics referenced in advanced physics publications including the Handbook of Feynman Path Integrals, his involvement in the world-wide scientific community as speaker, reviewer, meeting convenor, and journal referee.

He also has been an editorial board member, and his dedication to the improvement of physics teaching and research in the Philippines as Founding Director of the Research Center for Theoretical Physics, Central Visayan Institute Foundation (CVIF) in Jagna, Bohol and as former Director and Professor of the National Institute of Physics, University of the Philippines Diliman.

Dr. Del Rosario has contributed to science in astronomy, meteorology and physics. He attained acknowledgment for the work he did on soft x-rays necessitating high vacuum photography. He was one of the founders of the Bartol Research Foundation in Philadelphia that attempted innovative investigative analysis into nuclear physics. Dr. Del Rosario was given the Presidential Award for research and accomplishments in physics, meteorology and astronomy; and the University of the Philippines Alumni Award in 1965.

Dr. Banzon has accomplished a large amount of work on local substances, particularly coconut as a renewable origin of chemicals and fuels. He performed the first study on the creation of ethyl esters used as fuel from sugarcane and coconut. He also invented some original procedures, significant among these is the removal of residual coconut oil by chemical, instead of by physical processes.

Dr. Montaño is recognized for his superior scientific accomplishments in the branch of knowledge of biological chemistry, particularly, in the structural, chemical and physical works of carageenan, agar and other polysaccharides from Philippine seaweeds.

His research yielded information on the quality of Philippine natural grade carageenan, agars from distinct seaweeds, alginates and by-products, for example seaweed fertilizers and ink for the textile industry that have considerably contributed to the transformation and enlargement of the Philippine seaweed industry. Dr. Montaño has had over 40 articles published in major peer-reviewed scientific journals.

In the duration of 32 years as a Chemist in charge of grain quality research at the International Rice Research Institute (IRRI) from 1961-1993, Dr. Juliano contributed profoundly to primary knowledge in differences in varieties of grain quality of table rice and rice food products and rice nutritional quality, from his research conducted at IRRI and in cooperative studies with scientists in relevant fields of study.

Moreover, novel and better procedures for quality assessment were formed and tested. He carries on his rice research as a senior adviser at the Philippine Rice Research Institute (PhilRice) Los Baños since his retirement by choice from IRRI in June 1993. Dr. Juliano has authored or co-authored more than 370 scientific research papers on rice chemistry and quality. He has edited and contributed to various sections of the 2nd edition of the American Association of Cereal Chemists (AACC) treatise "Rice Chemistry and Technology" in 1985. 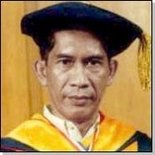 Dr. Navarro's major contribution to science is the discovery of nuclear attributes in the isotopes of californium, einsteinium and dysprosium utilizing cryogenic techniques. His research was mentioned in two books and three international scientific books of nuclear science and later confirmed at the University of California at Berkeley using advanced instrumentation.

Dr. Navarro has also worked on neutron spectrometry and crystallography; and electronics and instrumentation process.