Ecotourism in Metro Manila soon to have a first-rate site

Soon, Metro Manila residents can expect a world-class ecological tourist attraction in the heart of Quezon City that will offer them a breather from the smog while learning all about the importance of conserving the country's biodiversity.

This is how the Ninoy Aquino Parks and Wildlife Nature Center (NAPWNC) is being redeveloped by the Department of Environment and Natural Resources (DENR), according to Secretary Ramon J. P. Paje.

"Filipinos, young and old alike, will soon be able to enjoy a first-rate ecotourism center which is not only affordable and environment-friendly, but also a perfect venue for biodiversity conservation that will educate visitors on ecotourism in the Philippines and endemic flora and fauna," said Paje.

The master plan for the redevelopment of the 22.7-hectare park was conceived recently by a group of renowned urban planners Palafox and Associates. The estimated cost of implementation is P500 million.

The DENR secretary hopes for a partnership with the private sector in financing the park's redevelopment. "Our resources are very limited, whereas the private sector has the much needed business and technical expertise. Their participation will be very much welcomed, following certain investment guidelines because the park is a protected area," he said. 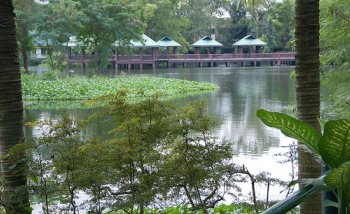 The DENR has taken to executing the redevelopment in stages. The Visitors' Center, which is usually the site of official meetings, training and the like, has been renamed as the Bulwagang Buhay-Ilang and is now equipped with wi-fi facilities as well as a functional library known as the Biodiversity and Climate Change Information Center.

The Wildlife Rescue Center, which provides temporary shelter for animals that are turned in by the public or those confiscated from illegal traders, has likewise expanded its functions and has been renamed as the Wildlife Rescue and Research Center.

There are on-going negotiations for additional entertainment and diversion as well. These include a commercial strip which will be the site of a weekend bazaar; regular weekend performance by the Teatro Filipino at the amphitheatre; zip-line adventure ride across the lagoon; and guided educational tour package for schools.

All buildings or infrastructure to be erected or renovated within the center will follow a theme that portrays sustainable designs and technology. "The overall scheme is for the park to showcase the use of green technology, architecture and energy," said Nelson Castillo, who is the Protected Area Superintendent (PASu).

Aside from its rescue center and a four-hectare lagoon that doubles as a fishing grove, the park's sprawling, tree-filled landscape provides excellent picnic and outdoor recreational grounds. It is also a common site for film or TV productions.

The park receives an estimated 500-800 visitors everyday, peaking to as much as 2,000 on weekends. It is also, without a doubt, an inexpensive get-away from the busy-ness and pollution of the city: entrance fees are pegged at P5.00 for students and P8.00 for non-students. Senior citizens and persons with disabilities (PWDs) enjoy free entrance.

Ecotourism in the Philippines is on the rise as the NAPWC was declared a protected area in 2004 under Republic Act 7586 or the National Integrated Protected Area System (NIPAS) Act. (PIA)