The Department of Tourism (DOT) is looking at establishing a stronger brand for the Davao region with this week’s launch of direct flights between Davao and Singapore via low-cost carrier Cebu Pacific.

“We already have an existing Singapore-Cebu-Davao flight via Silk Air. Now, Cebu Pacific will be offering a direct flight. With these flights Davao, we will have a greater access to the international market since Singapore is an international hub,” according to DOT region 11 director Robert Alabado.

“We are looking at attracting Singaporeans to consider Davao as a weekend getaway seeing that Davao region is very rich in its natural resources,” he added.

He noted that with the launch of this new route, the region will be able to better present dive sites of Samal Island in Davao Oriental as well as the nature spots of Davao to the Singaporean market.

The airline launched its direct flight between Davao and Singapore on Dec 17 marking its first international direct service out of Davao.

Cebu Pacific area manager for passenger sales in Mindanao Maria Dina Garcia during its launch said that the idea was to allow more Singaporeans and Davaoenos to travel to and from Singapore without having to fly to Manila.

“Davao and Mindanao are on the map for adventure loving Singaporeans and expats. We (also) will be able to cater to Filipinos based in Singapore who don’t have to come home to Davao via other airports,” Garcia said. 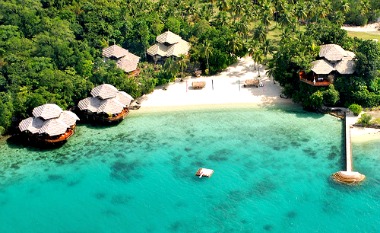 Garcia further said that this new route opens up the Philippines to more travelers from Singapore who can utilize Cebu Pacific’s network to explore Davao.

Currently, Alabado said that the local government of Davao is planning to hold an aggressive marketing campaign in Singapore in the first quarter of next year.

“We are planning to go to Singapore. This is like saying ‘let’s bring Davao to Singapore’. We want to give them a taste of Davao to entice them to come to Davao,” the regional director said.

Alabado said that although only five percent of around 2.5 tourists that visited Davao were foreign, he was hopeful that the Davao-Singapore route will be able to attract more foreign tourists to visit the region.

Aside from the Davao-Singapore flight, Cebu Pacific also launched direct flights between Manila and Fukuoka, Japan and between Cebu and Taipei, Taiwan on the same day.

Cebu Pacific vice president for marketing and distribution Candice Iyog said that the launch of these three international routes from Luzon, Visayas and Mindanao underscores the airline company’s commitment to provide more travel opportunities and make the Philippines and the world easily accessible.

First to be launched was Cebu Pacific’s direct Manila-Fukuoka thrice weekly service. The maiden flight departed from Manila at 2:15pm and arrived in Fukuoka at 6:55 p.m. The return flight left at 8 p.m. and arrived at 10:40pm. Fukuoka is the airline company's fourth destination in Japan after Osaka, Tokyo (Narita) and Nagoya.

The last launch for the day was the direct Cebu-Taipei thrice weekly service. The maiden flight departed from Cebu at 9:45pm and arrived in Taipei at 12:25am. The return flight left at 1:05am and arrived at 3:45am. This is CEB's sixth international route from Cebu. It also offers direct flights from Cebu to Hong Kong, Singapore, Incheon, Busan and Tokyo (Narita).